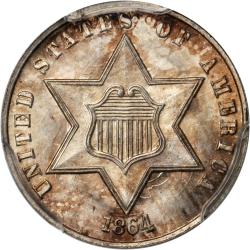 The 1864 Silver Three-Cent Piece is one of those coins that is known and desired by investors the world over. Unfortunately, this obscure coin was only produced for a short period of time, so it only follows that there are only a limited number of these coins still available. Due to the total number of Silver Three-Cent Pieces decreasing all the time, there has never been a better time than now for you to make a purchase.

On the obverse side of the 1864 Silver Three-Cent Piece, the main feature is a 6-pointed star that features the US Shield in the center. The features of this coin are remarkable because of how small they are and how rudimentary the technology of the time was. Around the outside of the center design you will find an inscription reading “United States of America.” On the bottom of the obverse there is an inscription marking the 1864 year of minting.

On the coin’s reverse, the central feature is a large capital “C” that is decorated in ornate fashion. Sitting within the center of the large “C” is the three-cent face value of the coin, depicted with Roman Numerals. Around the outside of all of this there are 13 individual stars. Each one of these stars is representative of one of the 13 original colonies of the United States.

For collectors, the simple fact of the matter is that the 1864 Silver Three-Cent Piece is a coin that is counterfeited all the time. Because of this, collectors the world over will only purchase the coins that have been certified as being authentic and legitimate. Below, you will find a listing of the different coin grades as well as what they mean.

Uncirculated: A coin that is determined to be of Uncirculated grade is one that never made it out onto the open market to be exchanged. These coins were kept in safekeeping from the day they were minted, and because of this will be in absolutely perfect condition.

Extremely Fine: An 1864 Silver Three-Cent Piece determined to be of Extremely Fine grade is a coin that may not be in absolutely perfect condition, but one that is near flawless. You may not even be able to notice the flaws with the naked eye, but they are there.

Fine: A Silver Three-Cent Piece that is determined to be of Fine grade is one that was definitely circulated for a period of time, but was taken out of circulation before long. These coins are going to feature scratching and chipping, but will otherwise be in decent condition overall.

Good: Good is the absolute worst grade a coin can receive and is indicative of one that has been heavily circulated and damaged. These pieces will feature a lot of scratching, chipping, and other signs of damage.