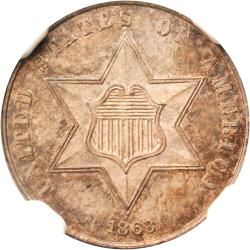 Experienced and inexperienced collectors alike will do just about anything they can to get their hands on an authentic 1863 Silver Three-Cent Piece. If you have never even heard of this coin, the reason is likely due to its limited time in circulation. Also coming as a result of this limited circulation is that there are only a small quantity of 1863 Silver Three-Cent Pieces available. Understanding this, it goes without saying that now is as good a time as ever to get your hands on one of these coins.

On the obverse of the 1863 Silver Three-Cent Piece, you will find a large, 6-pointed star in the center. Sitting within the center of that star is the Shield of the United States as it existed at the time of the coin’s minting. Around the outside of this central imagery you will find an inscription reading “United States of America.” On the bottom of the obverse, there will be an inscription marking the 1863 year of minting.

On the coin’s reverse, the design is a bit more involved and ornate. The coin’s main feature is the large capital “C” in the center, decorated in ways you have probably never seen before. Sitting within the “C” is the coin’s 3-cent face value written in Roman Numerals. Around the outside of this central imagery there exists 13 stars, each representative of one of the 13 original colonies of the United States.

For collectors, it is common knowledge that an extremely popular coin like the 1863 Silver Three-Cent Piece is going to be counterfeited at some point. With so many counterfeits on the market nowadays, it should come as no surprise that collectors will do anything to ensure that their purchase is an authentic one. As such, they rely on graded, certified coins. Below, you will find an outline of the different coin grades as well as what they mean.

Uncirculated: If an 1863 Silver Three-Cent Piece is determined to be of Uncirculated grade, this means that the piece in question will have been well-preserved from the day it was minted up until today. These coins will be in absolutely perfect shape and look today as they did when they were first minted.

Extremely Fine: If a coin is determined to be of Extremely Fine grade, this menas that the piece in question will be in nearly pristine condition, save for a few flaws. When simply viewing these coins you may not notice any glaring flaws, but they will be there.

Fine: A coin determined to be of Fine grade is one that was circulated for a period of time, but taken out of circulation before too long. These coins will show signs of regular wear and tear such as scratches and chips, but will be in great shape nonetheless.

Good: Good is the lowest grade a coin can receive and is indicative of a piece that has been both heavily circulated as well as heavily damaged. Despite their condition, these 1863 Silver Three-Cent Pieces are still highly sought after.