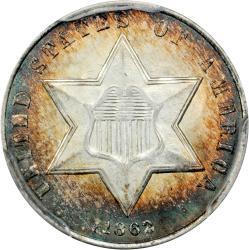 For collectors, there are few coins more desirable than an 1862 Silver Three-Cent Piece. This unusual, unique coin was produced during the late 19th century and went out of existence during the same exact time period. Because of this innate rarity, the coin is as popular today as it has ever been. Unfortunately, there is only a finite number of these pieces available, so it would behoove you to get your hands on one sooner rather than later.

On the obverse side of the 1862 Silver Three-Cent Piece, the design you will find is quite simple. In the center there is a large, 6-pointed star with the Shield of the United States in the center of it. The shield’s existence is truly remarkable due to how small, yet detailed, it is. Around the outer edges of the coin you will find an inscription that reads “United States of America.” Towards the bottom of the obverse there will be an inscription indicating the 1862 year of minting.

On the coin’s reverse, The main feature is a large, capital letter “C.” Within the ornate, decorated letter exists the coin’s 3-cent face value, indicated by Roman Numerals. There are other minor features within the large “C” as well. Around the outside of the central design there are 13 stars. Each one of these stars is representative of one of the 13 original colonies of the United States.

For collectors, the fact that this coin is so popular means that it is also subject to being counterfeited. As such, collectors interested in purchasing this coin must approach any purchase with extreme caution. Nowadays, those looking to purchase the Silver Three-Cent Piece will only do so if the piece is graded and certified as being authentic. Below, we have outlined the different coin grades to give you a better idea of what they mean.

Uncirculated: If an 1862 Silver Three-Cent Piece is determined to be of Uncirculated grade, this means that the piece in question never made it out onto the open market. Thanks to years and years of protection and safekeeping, these coins will appear today to be in flawless condition.

Extremely Fine: If a coin is determined to be of Extremely Fine grade, this means that the coin in question will have been maintained in a mostly pristine state. With that being said, the coin will feature a few very minor flaws.

Fine: A coin determined ot be of Fine grade is one that was out on the open market for a time, but was taken out of circulation before too long. These coins will play host to some consistent scratching and chipping, but most, if not all, of the surface imagery will have been preserved.

Good: Good is the lowest grade a coin can receive and is indicative of a piece that has been both heavily circulated and damaged. At times, the damage you will find on these coins is very severe and might even compromise some of the surface imagery and lettering.

In order to determine the price you might be asked to pay for an 1862 Silver Three-Cent Piece, the first thing you need to take into consideration is the condition the coin is in. As you might expect, the coins that have been well-preserved will carry a higher price than those that have not. In addition to this, the overall scarcity of the coin will come into play. Because there is only a limited number available, the price might be driven up as a result. Below, you will find a chart aimed at giving you a better idea of what you can expect to pay for a graded 1862 Silver Three-Cent Piece.