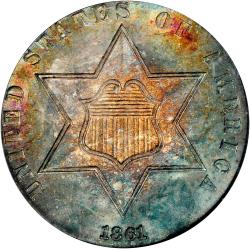 The 1861 Silver Three-Cent Piece is a coin that collectors from all over the world will pay a pretty penny to get their hands on. Though this is one of the most popular US coins as far as collectors are concerned, there are many people who are blissfully unaware of its existence. So long as this is the case, there has never been a better time to get your hands on one of these coins. This is especially true when you consider the quantity of Silver Three-Cents on the market is always decreasing.

On the coin’s obverse, the main feature is the image of a large 6-pointed star. Resting within the center of the star you will notice a rather small image of the United States Shield as it existed back in 1861. Around the outside of the central imagery there is a raised inscription reading “United States of America.” On the bottom of the obverse there is another inscription, this one marking the 1861 year of minting.

The coin’s reverse features a design that is very interesting as well as wholly unique. In the center there is an inscription marking the 3-cent face value, however the face value is marked by Roman Numerals rather than traditional numbers like you will find on most other US coins. The face value sits within the mouth of a large, fancy capital “C.” Around the outside of the central images you will notice that there are 13 stars. Each one of these is representative of the 13 original colonies of the United States.

For collectors, not just any 1861 Silver Three-Cent Piece will do. Being that this coin is so incredibly popular, there are many counterfeits on the market and more entering the market all the time. Because of this, wise collectors will only settle for coins that have been graded and certified as being authentic. Below, we have outlined the different coin grades as well as what those grades mean.

Uncirculated: If an 1861 Silver Three-Cent Piece is determined to be of Uncirculated grade, this means that the coin was never let out of safekeeping. Having been perfectly preserved from the day it was minted, these pieces will be in the same condition today as they were in in 1861.

Extremely Fine: If a coin is determined to be of Extremely Fine grade, this coin will appear to be without a single flaw. Under closer inspection during the grading process, however, there will be a few minor flaws uncovered. These blemishes are typically very minor and small.

Fine: Fine is the grade given to coins that were fairly heavily circulated, but taken out of circulation before too much damage could occur. You will notice some light scratching and chipping, however the coin will still be in decent shape.

Good: Good is the worst grade a coin can receive and is indicative of a piece that was both heavily circulated and damaged. These coins will be complete with all sorts of damage, ranging from chips, to scratches, and just about anything in between.

In terms of the price you might be asked to pay for an 1861 Silver Three-Cent Piece, this is something that can most easily be determined by the condition the coin is in. As you might expect, the coins that have survived the years in the best condition are the coins that will cost the most money. Below, we have a chart aimed at giving you a better idea of what you might be able to expect to pay for a graded 1861 Silver Three-Cent Piece.