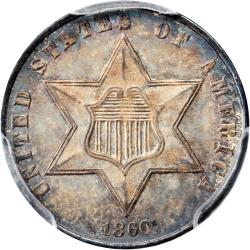 For collectors, there are few coins more unique nor desirable than the 1860 Silver Three-Cent Piece. If you are an American and have never heard of this coin, the reason for this is due to the fact that they were minted in such minuscule quantities. With the total number of coins on the market decreasing all the time, there has never been a better time to purchase one.

On the coin’s obverse, the main feature in the center of the coin is the raised image of a 6-pointed star. Within that large star you will find the Shield of the United States as it existed back in 1860. Around the very outer edges of this piece you will find an inscription reading “United States of America.” Finally, the 1860 year of minting will be listed on the bottom of the obverse.

On the reverse side of the coin, the main and most interesting feature is the 3-cent face value, which is represented on this coin by Roman Numerals. The central Roman Numerals are surrounded by the opening of a capital “C,” which is decorated ornately. On the outer edges of the reverse you will notice there are 13 stars. Each one of these stars represents one of the original 13 colonies of the United States.

It is only natural that collectors of all types strive to get their hands on the 1860 Silver Three-Cent Piece, but in the same breath there must be caution exercised before you execute a purchase. The reason for this is due to the fact that there is a large number of counterfeit Silver Three-Cent Pieces on the market. Because of this, collectors will only settle for those coins that have been graded and certified as being authentic. Below, we have outlined the different coin grades as well as what those grades mean.

Uncirculated: A coin determined to be of Uncirculated grade is one that never made it out onto the open market. From the day the piece was minted up until today, these pieces were kept in a safe place where they avoided any and all damage. As you might expect, these coins are the most highly sought after.

Extremely Fine: An 1860 Silver Three-Cent Piece that is determined to be of Extremely Fine grade will be in great condition save for a few minor flaws. Though you may not always be able to see these blemishes with the naked eye, they are there and are taken into account during the grading process.

Fine: Fine is the grade given to pieces that were circulated for a period of time, but were taken out of circulation before they could be too heavily damaged. You will notice plenty of light scratching and some chipping on the surfaces of these coins, but they will generally still be in decent shape.

Good: Good is the worst grade an 1860 Silver Three-Cent Piece can receive. These coins will have definitely seen their better days and will be complete with a host of damage, ranging from deep scratching to chipping.

In terms of the price you might be asked to pay for an 1860 Silver Three-Cent Piece, this is something that requires you taking into account a few different factors. For one, the coin’s condition means absolutely everything. In almost every scenario, the more well-preserved a coin is, the more expensive it is going to be. Beyond that, factors such as scarcity also coming into play. Below, you will find a chart aimed at giving you a better idea of what you might be asked to pay for a graded 1860 Silver Three-Cent Piece.