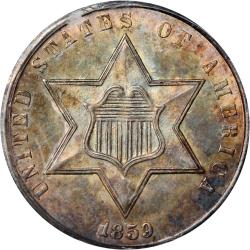 The 1859 Silver Three-Cent Piece is a coin that any collector is keen to add to their collection. If you have never heard of this coin before, there is good reason for this. After all, the Silver Three-Cent Piece was only minted for a limited number of years, and in limited quantities. As we move forward in time, the remaining quantity of these coins will only ever decrease, making now perhaps the best time to get your hands on one of these pieces.

On the coin’s obverse, the main feature is that of a raised, large, 6-pointed star. Within that star you will find the image of the official Shield of the United States, or at least the official shield that existed back when the coin was minted. Around the outer edges of the obverse there is a raised inscription reading “United States of America.” Finally, the 1859 year of minting is inscribed towards the bottom of the obverse.

On the coin’s reverse, the design is very simplistic. In the center, you will notice the 3-cent face value inscribed in Roman Numerals. The face value is sitting within a large, capital “C” that is decorated extravagantly. The outer edges of this coin feature 13 stars, which represent the 13 original colonies of the United States.

For collectors, simply owning an 1859 Silver Three-Cent Piece is not enough. Because these coins are so popular they are also frequently counterfeited. As such, collectors are only going to purchase the coins that have been both graded and certified as being authentic. Below, we have outlined the different coin grades as well as what, exactly, those grades mean.

Uncirculated: If a coin is determined to be of Uncirculated grade, this means that the piece has never made it out onto the open market. Having been kept in safekeeping from the time the piece was minted, these coins will be absolutely flawless.

Extremely Fine: If an 1859 Silver Three-cent Piece is determined to be of Extremely Fine grade, this means that the coin will be in great condition, but not flawless. The Catch 22 with these coins is that the flaws they boast are often not able to be viewed with the naked eye. If they are, they are minor, such as a single scratch or two.

Fine: Fine is the grade given to coins that have been circulated to some degree, but were taken out of circulated before they could incur too much damage. On the surfaces of these coins you will notice light scratching and some chipping.

Good: Good is the grade given to the worst of the worst 1859 Silver Three-Cent Pieces. These coins will have been both heavily circulated as well as heavily damaged. Despite this damage, these pieces are still incredibly sought after by collectors.

In terms of the price you might be asked to pay for an 1859 Silver Three-Cent Piece, this is something that can be determined first by the condition the coin is in. Naturally, the coins that have been well-preserved throughout the years are going to fetch a higher asking price than the coins that have been heavily damaged. Beyond the condition—which is probably the most important factor—price can also be determined by just how many of these coins there are for sale. If there is only a limited quantity for sale, the price, per coin, will be high. Below, there exists a chart aimed at giving you a better idea of what you might be asked to pay for a graded 1859 Silver Three-Cent Piece.