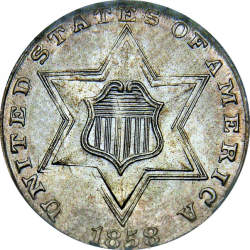 The 1858 Silver Three-Cent Piece is a coin collectors of all types will do absolutely anything to get their hands on. A major part of the reason behind this has to do with how rare the coin really is. First off, the Silver Three-Cent Piece was only minted for a few years, and only in limited quantities. Understanding that, as well as how long ago they were minted, it should make sense that there are only a few of these coins still on the market today.

On the coin’s reverse, the design is just as simplistic. The center is marked by the coin’s three cent face value. The three cent face value exists as Roman Numerals and they sit within the mouth of a capital “C” that is ornately decorated. Around the outside of this coin face you will find 13 stars, each representative of one of the 13 original colonies of the United States.

For collectors, coins as old as the 1858 Silver Three-Cent Piece are counterfeited quite frequently nowadays. In order to protect themselves from any and all counterfeits, collectors will only settle on and purchase the coins that have been graded and certified as being authentic. Below, we will touch on the different coin grades as well as what those grades mean.

Uncirculated: An 1858 Silver Three-Cent Piece that has been graded as Uncirculated is a piece that was kept in safekeeping throughout the entirety of its existence. These pieces will be in absolutely perfect condition and will look today exactly as they did back in 1858.

Extremely Fine: If a coin is determined to be of Extremely Fine grade, this means that the piece in question will be mostly free from damage, save for a few minor flaws. Though some of the damage on the coin will not be visible to the naked eye.

Fine: Fine is the grade given to coins that have been circulated to some extent, but were taken out of circulation before too much damage could occur. The damage you will notice on these coins is typically reserved to some light scratching and chipping.

Good: Good is the worst grade a coin can receive, and is indicative of a piece that was both heavily circulated and heavily damaged. These pieces will be so damaged that some of the imagery and lettering on the surface will be difficult to decipher with the naked eye.

In terms of the price you might be asked to pay for the 1858 Silver Three-Cent Piece, this is something that can most easily be determined by the condition of the coin. Naturally, the more well-preserved a coin is, the more expensive it is going to be. Beyond that, the scarcity of the coin will also come into play. As you can expect, the price of an 1858 Silver Three-Cent Piece will be higher if there are only a limited quantity available. Below, there is a chart aimed at giving you a better idea of what you might be asked to pay for one of these coins.