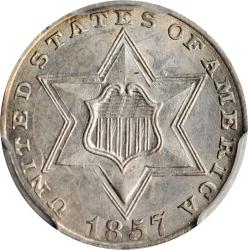 The 1857 Silver Three-Cent Piece is a coin collectors of all types will do just about anything to get their hands on. There are a number of reason as to why this is so, however the two most common are that there were not very many minted, and by extension not very many remaining on the market today. Thanks to the ever-decreasing quantity of 1857 Silver Three-Cent Pieces on the market, there has never been a better time than now for you to get your hands on one.

As far as the coin’s design is concerned, the obverse side of the coin is dominated by a large, 6-pointed star. Within the star exists the image of the US Shield as it existed at the time of the coin’s minting. Around the outer edges of the obverse there is an inscription raised from the face of the coin that reads, “United States of America.” On the bottom of the obverse you will notice the 1857 year of minting inscribed.

On the coin’s reverse, there is a wholly unique design. In the center of the face, the coin’s face value is marked by the Roman Numeral 3. The face value itself sits within a large, ornate capital “C.” Around the outside of the central imagery exists 13 stars, each one representative of one of the original 13 colonies of the United States.

For collectors, the modern day has brought with it innumerable counterfeit pieces. When it comes to the 1857 Silver Three-Cent Piece, the coin is no exception. Being that there are plenty of fakes circulating around the market, collectors with any sense will only purchase those coins that have been graded and certified as being authentic. The following will walk you through the different coin grades as well as what those grade mean.

Uncirculated: A coin determined to be of Uncirculated grade is one that never made it out onto the open market. Thanks to this coin having been preserved from the day it was minted, its appearance will be flawless. Even under the closest inspection the coin will still appear today exactly as it did when it was first minted.

Extremely Fine: A coin determined to be of Extremely Fine grade is one that will be in nearly perfect condition save for a few minor flaws. In many cases, the flaws that exist on the surface of this coin are only minor in nature and are nothing to worry about.

Fine: Fine is the grade given to Silver Three-Cent Pieces that have been circulated to some extent, but were taken out of circulation before too much damage could occur. Fine coins will be complete with scratches and other signs of wear and tear, but their overall condition will have been well-preserved.

Good: Good is the grade given to coins that have been heavily circulated and heavily damaged. These pieces will feature many deep scratches and other blatant signs of wear and tear. Despite their somewhat poor condition, these pieces are still highly sought after by collectors.

In terms of the price you might be asked to pay for an 1857 Silver Three-Cent Piece, this is something that can be determined first by assessing the condition of the coin. As you might expect, the more well-preserved a piece is the higher the asking price is going to be. Beyond this, the scarcity of the coin will come into play. As the number of coins available decreases, the price you will have to pay increases more often than not. Below, you will find a chart aimed at giving you a better idea of what you might be asked to pay for a graded 1857 Silver Three-Cent Piece.