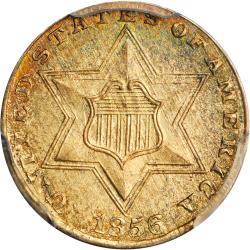 The 1856 Silver Three-Cent Piece is one of those coins that collectors desire, but is also one of those coins that is not so easy to find. Whether it be the fact that they were produced so long ago, or the fact that they were produced in such limited quantities, there is no denying that these coins leave the market as soon as they are posted for sale. Being that the total number of 1856 Silver Three-Cent Pieces available will only ever decrease, there has never been a better time than now for you to get your hands on one.

On the coin’s obverse, the center is marked by the Shield of the United States, depicted in way that sees the shield raised off the coin’s face. The shield sits within a 6-pointed star that is quite large. Around the outside of all of this you will notice a raised inscription reading “United States of America.” Finally, the 1856 year of minting will be inscribed towards the bottom of the face.

On the coin’s reverse, you will find yet another rather simplistic design. Because the coin was so small, technology of the time did not allow for highly detailed imagery. In the center of the reverse, you will notice the 3-cent face value spelled out in Roman Numerals. The face value is sitting within the center of a large, ornate “C.” Finally, around the outside of the central imagery are 13 stars, each one representative of one of the 13 original colonies of the United States.

Whether you are a new or seasoned collector, the fact of the matter is that you must exercise caution when it comes to purchasing an 1856 Silver Three-Cent Piece. The reason for this is due to the unfortunate reality that there are a large number of counterfeit pieces floating around. Because of the existence of counterfeits, collectors will only purchase Silver Three-Cent Pieces that have been both graded and certified as being authentic. Below, we have outlined the different coin grades as well as what those grades mean.

Uncirculated: If an 1856 Silver Three-Cent Piece has been the recipient of an Uncirculated grade, this means that the coin will have never made it out onto the open market. Instead, these pieces will have been kept in a safe place from the time they were minted through the modern day. As you might expect, their appearance is flawless.

Extremely Fine: If a coin is the recipient of the Extremely Fine grade, this means that the piece was kept in decent condition, but is not free from blemishes or damage. Though the damage you will find on the faces of these coins is often even difficult to make out with the naked eye, it will be accounted for during the grading process.

Fine: Fine is the grade given to coins that have been circulated for a period of time, but were pulled from circulation before they could incur too much damage. These pieces will show consistent, light scratching and other small signs of damage.

Good: A coin that receives a Good grade is one that spent a lot of time in circulation and was also heavily damaged. These pieces are often so damaged that some of the surface imagery has been compromised, but more often than not will still be highly sought after by collectors.

With regard to the price you might be asked to pay for an 1856 Silver Three-Cent Piece, this is something that depends both on the scarcity of the coin in question as well as its condition. Naturally, those coins that have been well-preserved are going to fetch a higher asking price than those that haven’t been. In addition, if there is only a few coins remaining for sale, their asking price will be higher than an edition with large quantities available. Below, you will find a chart aimed at giving you a better idea as to what you can expect to pay for a graded 1856 Silver Three-Cent Piece.