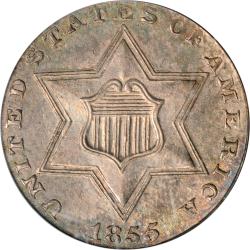 The 1855 Silver Three-Cent Piece is a coin any and every collector will go to great lengths to get their hands on. The reasons for this are many, but it all boils down to the fact that these coins have not been minted in well over a century, and were only minted in limited quantities. As such, there are only a few of these coins still around and able to be purchased.

On the coin’s obverse, the central feature is that of a raised depiction of the US Shield as it existed at the time. The shield sits within a 6-pointed star. Around the outside of the central imagery is a raised inscription which reads “United States of America.” Rounding out the rather simplistic design of this coin is the raised indication marking the 1855 year of minting.

On the coin’s reverse, the 3-cent face value is depicted in the center by way of Roman Numerals. The Roman Numerals sit within the opening of a large, decorated “C.” Around the outside of the face value and related imagery sits 13 stars, each one representative of one of the original 13 colonies of the United States.

For collectors, not just any 185 Silver Three-Cent Piece will do. Thanks to the extreme popularity of these pieces, counterfeiters from all over the world have flooded the market with fakes. Understanding this, collectors will only purchase the coins that have been both graded and certified as authentic. Below, we have touched on the different coin grades as well as what they mean.

Uncirculated: A Silver Three-Cent Piece that is determined to be of Uncirculated grade is one that, from the time it was minted to today, was kept in safekeeping. These coins, because they never exchanged hands, will be in absolutely perfect condition today.

Extremely Fine: An Extremely Fine 1855 Silver Three-Cent Piece is one that will look to be in flawless condition, but under close inspection some minor flaws will be noticed. Whether it be a few scratches, a few chips, or both, there will be items taking away from the coin’s flawless appearance.

Fine: A coin determined to be of Fine grade was circulated for a while, but was taken out of circulation before too much damage could occur. These pieces will play host to scratching, smoothing, and even some chipping. With all of that said, they will still be in relatively solid condition overall.

Good: A Good 1855 Silver Three-Cent Piece is a coin that has definitely seen its better days. These pieces will be worn, scratched, and chipped thanks to years and years of circulation. Despite their tattered condition, these pieces are still highly sought after by collectors.