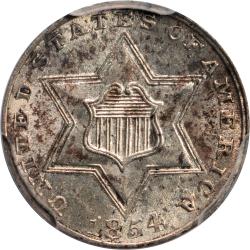 The 1854 Silver Three-Cent Piece is a coin that collectors will do anything to get their hands on. For so many reasons, this is one of the most popular coins in the eyes of collectors, both in the United States and around the world. This coin is unique not only because it was one of the last silver coins produced by the US Mint, but also because the Silver Three-Cent Piece was produced for such a short period of time. With only a limited quantity still around, there has never been a better time to get your hands on one of these coins.

On the obverse side of the 1854 Silver Three-Cent Piece, the center of the face is marked by the raised image of the US Shield sitting within a 6-pointed star. Around the outside of the star you will notice an inscription reading, “United States of America.” Finally, the 1854 year of minting will be inscribed on the very bottom of the obverse.

On the coin’s reverse, there is a Roman Numeral 3 in the very center, marking the coin’s face value. An ornate “C” is mostly surrounding the central face value, and gives the reverse’s design a bit of added texture. Around the outside of the “C” you will find 13 raised stars, each one representative of one of the 13 original colonies of the United States.

For collectors, there must be caution exercised whenever they are thinking about purchasing an 1854 Silver Three-Cent Piece. The reason this is so is due to the fact that these coins are extremely popular, but also only found in limited quantities. As such, there is a higher number of counterfeits out there than you might expect. For this reason, collectors will only purchase those coins that have been graded and determined to be authentic. Below, we have highlighted the different coin grades as well as what they mean.

Uncirculated: A coin that is determined to be of Uncirculated grade is one that, quite literally, never made it out onto the open market. Having never exchanged hands, these piece will exist today in the same exact condition they were in when they were first minted.

Extremely Fine: A Silver Three-Cent Piece that is determined to be of Extremely Fine grade are coins that might not have ever been circulated, but are not totally free from damage. These pieces will feature one or two minor flaws, and some of these flaws may not even be noticeable with the naked eye.

Fine: Fine is the grade given to 1854 Silver Three-Cent Pieces that were circulated for a period of time, but taken out of circulation before too much damage could occur. These coins will feature light scratching on both sides of the coin, but their imagery and lettering will be mostly intact.

Good: Good is the lowest grade a coin can receive and is indicative of a Silver Three-Cent Piece that has seen better days. These coins will be complete with a lot of scratching and smoothing of the raised lettering and imagery. On occasion, the smoothing will be so significant that some of the imagery and lettering might be lost forever.