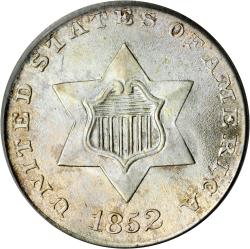 The 1852 Silver Three-Cent Piece is a coin that any serious collector will go to great lengths to get their hands on. The reason for this is because the coin in question is one of the most interesting pieces ever produced by the US Mint. It was only minted for a short period of time and lays claim to the title as being the lightest coin ever produced by the mint. With all of this being said, the limited quantity of these coins having been produced combined with the fact they there are fewer available all the time means that now is as good a time as ever to get your hands on one.

On the obverse side of the Three-Cent Piece, you will find in the center the shield of the United States within a 6-pointed star. The shield is quite small, and that is impressive for no other reason than the technology of the time was crude. Around the outside of the central imagery you will find an inscription that reads “United States of America.” On the bottom part of the obverse, you will also notice the 1852 year of minting inscribed.

The reverse side of the coin is interesting for a few different reasons. In the very center, you will see the coin’s 3-cent face value marked by a Roman Numeral 3. The 3-cent face value exists within a large “C,” and around the outside of that there are 13 stars. These 13 stars are representative of the 13 original colonies of the United States.

For collectors, the biggest concern with regard to the 1852 Three-Cent Piece is the authenticity of it. The coin is incredibly unique and incredibly difficult to find, and this means that there are plenty of counterfeits circulating. As such, collectors are only going to purchase the 1852 Silver Three-Cent Pieces that have been graded and certified as being authentic. Below, we have outlined the different coin grades as well as what the grades mean.

Uncirculated: If you are in possession of an Uncirculated 1852 Silver Three-Cent Piece, you have a coin that was never circulated on the open market. From the very first day that these coins existed they were placed into safekeeping. As such, their appearance today is exactly as it was back in 1852.

Extremely Fine: A coin determined to be of Extremely Fine grade is one that will be in absolutely perfect condition, save for a few minor flaws. In most cases, these flaws are minuscule and difficult to notice, but they are still there and still taken into account during the grading process.

Fine: If a coin is determined to be of Fine grade, this means that you have a coin that has been circulated. Though the coin did exchange hands over the years, the surface imagery and lettering will have still be preserved and visible to the naked eye.

Good: Good is the worst grade a coin can receive and is indicative of a piece that has been both heavily damaged and heavily circulated. The damage on these coins is severe, but the pieces are still highly sought after by collectors.

In terms of assigning a price for the 1852 Silver Three-Cent Piece, this is something that can be done by first and foremost looking at the condition of the coin. As you might expect, the coins that have been well-preserved are the ones that will carry the highest price tags. In addition to that, you will also have to look at the scarcity of the coin. Naturally, the fewer coins that exist the more expensive they are going to be. Below, we have provided a chart aimed at giving you a better idea of what you might be asked to pay for a graded 1852 Silver Three-Cent Piece.