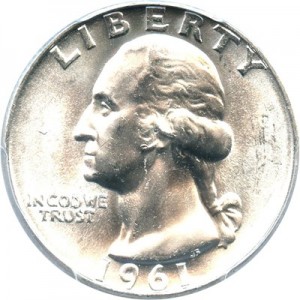 You will undeniably recognize the Washington Quarter, simply because it is one of the most widely used coins in the United States. For collectors, the Washington Quarters that are desired are those that were produced prior to the mid-1960s. These coins contain a higher content of silver, and harken back to a time when all US coinage had some sort of precious metals in them. Nowadays, though these coins are not all that old, they are regularly being bought up by collectors both in the US and around the world.

The one challenge for collectors, however, is the fact that while there are many of these coins around, there are not all that many in well-preserved condition.

When it comes to coins like the 1961 Washington Quarter, you will notice that collectors carefully analyze each and every coin prior to making a purchase. The reason for this is simple—by assessing a coin before purchasing it, they can do their best to only purchase those coins that are in excellent condition.

For many people, the preferred route is to send the coin away for grading. Taking into account the fact that not everyone can afford to have their coins sent away for grading, we have provided below an outline of the different popular coin grades as well as their related characteristics.

Uncirculated: If a coin is determined to be of Uncirculated grade, this means that the piece in question will have spent almost no time at all on the open exchange market. Having preserved its texture and imagery, these coins appear as though they were minted in recent history, rather than 50+ years ago. It goes without saying that these are the most sought after coins for collectors.

Extremely Fine: If a coin is determined to be of Extremely Fine grade, it means that the piece in question will have spent almost no time at all being exchanged. However, because these pieces did spend some time on the open exchange market, there will be some light signs of wear and tear, but they will be very difficult to pick out with the naked eye.

Fine: A coin that is receiving of a Fine grade will have been circulated extensively, but will have avoided any major damage. Instead, what you will find is that these coins play host to some light scratching and surface wear, but other than that they are in ok shape.

Good: Good is the lowest grade a coin can be given and is indicative of a piece that has been circulated for decades and decades on end. As you might expect, these coins will show a lot of damage and may even have had the imagery and inscriptions worn away through the years. In this condition, only collectors looking for a bargain will want to add them to their collections.

For coins such as the 1961 Washington Quarter, determining a price is something that is not all that difficult to do. For one, because there were many different types of these quarters produced some years, the exact type of coin you own will play into the asking price. Secondly, and perhaps not needing to be said, is the fact that the coin’s overall condition also very heavily affects the asking price. Below is a chart aimed at giving you a better idea of what you might be asked to pay for a Washington Quarter given its condition and type.