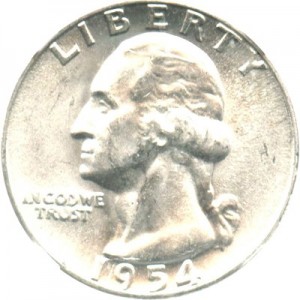 Over the years, the US Mint has been behind many of the world’s finest and most sought after coins. Though the mint’s official job is to produce the coinage of the United States and other countries of the world, they are becoming known as more than a simple mint. Founded back in the 1790s, the US Mint has played an integral role in the development and maintenance of the US economy.

One of the most famous and recognizable coins ever produced by the US Mint was the Washington Quarter. In fact, this coin is still being produced today, though it differs greatly from what it was during the middle parts of the 20th century.

Coins that are more than 50 years old have often been subjected to years and years of circulation, during which they could have become heavily damaged. For collectors, condition of a coin is paramount, and those coins that have been well-preserved will always garner the most attention from collectors. With regard to the 1954 Washington Quarter, the coin’s condition means everything and directly influences how much the asking price will be.

Having the coin graded by a professional company is an option, but often an expensive one for many coin collectors. Knowing that not everyone can afford to have their coins sent away for grading, we have provided below an outline that does well to explain the different coin grades along with their associated characteristics.

Uncirculated: Coins that are graded as being Uncirculated are those that never spent any amount of time changing hands on the open market. These coins will appear to be pristine because they were not subjected to any of the conditions regularly circulated coins were. As you could have probably guessed, these coins are not only the most sought after by collectors, but also some of the most expensive.

Fine: Fine is a grade reserved for coins that have been circulated, but were able to avoid the heavy damage typically associated with coins that have been in circulation for extended periods of time. These coins will show plenty of wear and tear, but none of it will be so significant that you are unable to make out the imagery and inscriptions present on the coin’s faces.

Good: Good is the grade reserved for coins that have not been very well preserved at all. Having been circulated very heavily, these coins will show plenty of signs of wear, and will most often also be complete with fairly heavy nicks and scratches. Still valuable for anyone who wants to put together an entire collection without breaking the bank, these coins are in fairly rough shape.

When it comes to determining a price for the 1954 Washington Quarter, there are a few things you must pay attention to. For one, because multiple editions of the coin were produced every year, the exact type of Quarter you own will play into what the asking price will be. In addition, the condition of the coin will also determine how much the asking price is. Below is a chart aimed at giving you a better idea of what you might be asked to pay for a Washington Quarter given its condition and type.