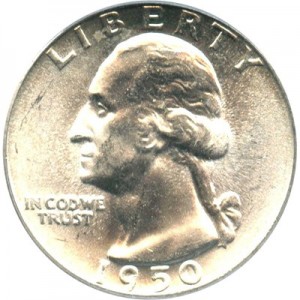 The US Mint was founded shortly after the founding of the United States itself. Since then, the mint has come a long way and is now tasked with producing the coinage of not only the United States, but that of many other countries around the world as well. Of all the coins produced by the mint over the years, few are more recognizable than the Washington Quarter, which was first introduced in the early 20th century.

The coin is still being produced today, but for collectors, early editions are especially valuable. The one major thing to consider, however, is the fact that the age of these coins means that many of them were subjected to a good bit of damage over their lifetime. Finding undamaged coins is always the goal of collectors.

For collectors, the condition of the coins which they collect means everything because no one wants to add a rough-looking coin to a collection. Though, comparatively speaking, the 1950 Washington Quarter is not as old as many other collectible US coins, but it is still old enough that many of these coins have seen a lot of damage.

For most collectors, having the condition of their coin officially judged by a coin grading organization is preferred, but not everyone has the time and the money to do this. Understanding that, we have provided below an outline of the different characteristics of graded coins.

Uncirculated: An Uncirculated coin is one that spent almost no time whatsoever in circulation. These coins will have been well-preserved from the moment they were minted because no damage is present anywhere. Selling for the highest prices, these coins are also the most sought after by collectors.

Extremely Fine: An Extremely Fine Washington Quarter is one that was in circulation for a short period of time before being kept in a safe place. Though there will be some damage on these coins, the damage will most often be light in nature and only visible upon close inspection. These coins too are very popular amongst collectors.

Fine: This is the grade given to Washington Quarters that are in decent shape, but have definitely seen better days. Pieces of this grade will have a somewhat smooth surface due to the texture being worn down over the years. In addition, there will often be light scratching across the entirety of the coin’s surface.

Good: A coin that is graded as being Good is a coin that has received the lowest grade available. These coins will boast a lot of damage that can range from heavy scratching to the bending of the coin itself. Though in rough shape, these pieces are attractive to collectors who are looking to put together a complete collection of Quarters.