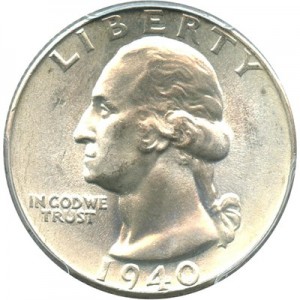 Nowadays, collectors are interested in the Washington Quarter as it is a historic piece of coinage and perfect addition to any collection. Unfortunately, the coin’s age means that many editions have been heavily damaged from the time the piece was minted to today. With that being said, make no mistake about it, there are still plenty of well-preserved pieces for you to get your hands on.

For coins that are as old as the 1940 Washington Quarter, the condition of the piece is never guaranteed and is often quite poor. For collectors, the constant battle is one that sees them sifting through coins to find the most well-preserved piece available. Pouring over the faces, collectors will stop at nothing to find the perfect addition to their collection.

Typically, a Washington Quarter’s condition is judged by a professional grading company that carefully assigns grades based on the overall condition of the piece. We know that not everyone has the time and money available for grading, so we have provided below an outline of the characteristics of graded coins.

Uncirculated: This is the grade given to those few coins that, after being produced, were immediately placed into safekeeping. These coins appear as though they were recently minted and have retained all of the original texture and imagery. Collectors jump at the opportunity to purchase these coins, as they are often quite difficult to find.

Extremely Fine: A coin that is graded as being Extremely Fine is one that spent only a limited amount of time in circulation. Thanks to only being circulated for a little bit of time, these coins have been well preserved and appear to look similar to Uncirculated editions. Under close inspection, however, you will be able to make out some small imperfections.

Fine: Though most Washington Quarters are not graded in this condition, there will come a time when many of these coins are receiving of a Fine grade. Fine basically means that while the coin was circulated for some time, it did not incur a large amount of damage during that time. All in all, these coins are in decent shape.

Good: Good is a grade that basically says that the coin in question was fairly heavily circulated. These coins will show ample signs of wear and will, in some cases, be fairly heavily damaged. All in all, anyone who is looking to put together a complete collection will love to get their hands on these affordable pieces.

If you are attempting to determine a price for the 1940 Washington Quarter, you must consider a few things first. For one, because multiple types of Quarters were produced annually, the scarcity associated with the specific type of Quarter will play into the price. Secondly, as is always the case, the condition of the coin will also play a major role in determining a price point. The chart below is aimed at giving you a better idea of what you can expect to pay for a 1940 Washington Quarter given its condition and type.