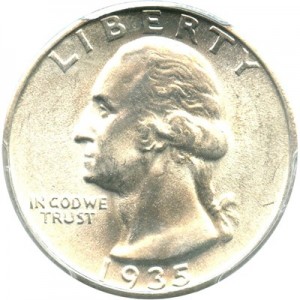 The Washington Quarter is one of the most iconic pieces of American coinage ever produced by the US Mint. Not only is it notable for its imagery, but earlier editions of the coin were produced using silver which gives the coins a higher inherent value.

Nowadays, collectors everywhere are trying to put together complete sets of the Quarter that is still being produced. Though it is not difficult to find a modern Quarter, finding those editions from the early years of production is especially difficult. This is even truer when you are trying to find one of these coins in excellent condition.

For any coin from the 1930s, the first thing any collector will look at is the condition of the coin. These coins, being as old as they are, have been subjected to a lot of damage over the years and many of them will quite aptly show this damage. Collectors are tasked with purchasing only those coins that have passed each individual collector’s individual condition requirements.

Normally, we see people send their coins away to be graded by a professional company, but not everyone has the extra time and funds sitting around to pay for grading. Knowing this, we have provided below a listing of the different aspects of coins of specific grades as to give you a better idea of what a coin of a certain condition might look like.

Uncirculated: A coin that has been graded as being Uncirculated is one that has spent no time at all being exchanged. Instead, these coins were put into safekeeping shortly after being minted and have avoided any and all damage. While these are definitely the most sought after types of Quarter, they are by no means the cheapest.

Extremely Fine: For a coin to be graded as being Extremely Fine, the piece in question will have had to been circulated for only a very short period of time. As such, you will likely not be able to notice much damage or wear by simply looking at the coin. Under close inspection, however, you will be able to see some light signs of wear and tear.

Fine: A coin that is given the grade of Fine is one that spent time in circulation, but was somehow able to avoid the heavy damage you often find with these coins. The overall imagery of the coin will remain intact, but the raised texture of the faces will have been worn down over the years.

Very Good: Very Good is a grade given to coins that have been extremely heavily circulated, but are not in such terrible shape. Though you will undoubtedly be able to make out plenty of heavy scratching and sometimes even chipping, these coins will be somewhat preserved such that adding them to a collection is not at all out of question. On top of it all, these are some of the most affordable Washington Quarters on the market today.