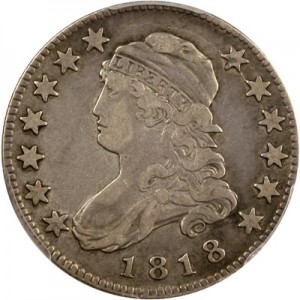 Early Bust quarters have a higher value than most others because they were produced such a long time ago and, as such, are not so easy to locate anymore. Produced during the final years of the 1700s up through most of the 1830s, these coins are an especially important part of American coinage history and thus extremely valuable to collectors from both the US and elsewhere around the world.

Generally, an Early Bust Quarter will be in fair condition with signs of wear and tear easily made out with the naked eye. Not only was it uncommon for these coins to have been preserved straight from the time of minted, their sheer age means that they have had a century or more to have become damaged. The price you will be asked to pay for one of these coins can range dramatically, but is often quite a bit.

What You Will Pay for an Early Bust Quarter

Naturally, any collector or prospective collector is going to care first and foremost about how much money they are going to have to shell out for one of these coins. Simply put, you will be hard-pressed to find a single Early Bust 25-cent piece for prices under $60. What’s more, that $60 price tag will almost always be placed on a piece that has been heavily worn over the years.

Realistically, the price you are going to pay is all dependent on the specific coin you have. The prices change from year to year, and this is most often due to the rarity of the coin. While a coin from 1807 may be extremely difficult to find, the coin produced a year later may have thousands available on the market today. In general, a collector can expect to pay anywhere between $100 and $3,000 for an Early Bust Quarter. That thousands-of-dollars price is typically reserved for particularly old coins that are in particularly good condition.

The Most Desired Early Bust Quarter

Determining the most desired Early Bust Quarter is something that can really only be done by individual collectors. Having said that, it is generally agreed upon that the most desired coins are the ones that were produced the longest ago. This is why you will find that the average price for an Early Bust produced in 1819 graded to be Extremely Fine will sell for a price that is nearly $1,000 more expensive than a similarly graded coin from 1837.

Condition is something collectors are always paying attention to, so that too will determine which coins are highly sought after and which ones are not. Being as old as they are, you will find that the critique placed on the condition of these quarters is much less severe than it is for quarters produced in the 1950s. This is only so because collectors take into consideration the fact that these quarters were being circulated and exchanged for more than 100 years more than those that were minted in the 1950s.

Knowing that the fact that these coins’ age plays heavily into the asking price, it goes without saying that prices paid for Early Bust Quarters are only going to increase. As time moves forward and fewer and fewer of these coins are available on the market, the price has no choice but to be driven upward. We have seen this happen with coins in the past and are, to some extent, already seeing it happen with the Early Busts.

Collectors who are thinking about adding some of these coins to their collection would do best to act now, because there will only ever be fewer Early Busts on the market. Having been around for so long, the value of these coins is likely to rise much faster than the value of quarters that were produced after the Early Bust.