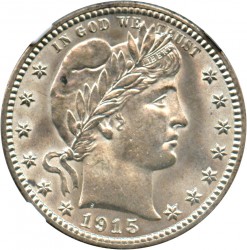 The United States Mint, is now one of the largest and most popular minting facilities in the world. Throughout the mint’s storied history, it has produced a large number of coins that are now extremely popular in the eyes of collectors. These coins range in size and quantity, but so long as the US Mint name is attached to them they will be seen as collector’s items.

Nearly 8 million Barber quarters were minted in 1915, which is a fairly high number as compared to the mintages of the few previous years. While the 1915-S did see a mintage of less than 1 million, that issue is not considered anything scarcer than a “better date.” The 1915 Philadelphia and Denver issues are common and, all around, 1915 is an affordable year for coin collectors looking to pick up well-circulated examples of Barber quarters from the year.

The Barber Quarter is just one of many coins now valued by collectors, but is easily one of the more popular products of the US Mint. Produced during the late 19th and early 20th century, these quarters played a pivotal role in the lives of everyday Americans.

For coins like the 1915 Barber Quarter, which were produced a century ago, the state of the condition means everything to a prospective collector. No one wants to add damaged, tarnished coins to their collection, so it makes sense that most every collector will closely examine the condition of a Barber Quarter before executing a purchase.

Normally, coins are sent away for grading in order to have their condition accurately judged, but not everyone has the available funds to send coins away for official grading, so we have provided specifications below to give you a better idea of what coins of a specific grade might look like.

Uncirculated: Coins that are graded to be Uncirculated are those that never spent any time exchanging hands or paying for goods. Instead, these coins were put into safekeeping almost immediately after they were minted. As a result of their being kept in a safe place, these coins have not suffered any of the damage typically associated with Barber Quarters of this age.

Fine: Coins that receive this grade are those that spent a decent bit of time being circulated. Due to their being exchanged over a moderate period of time, these coins have suffered a bit of wear. The raised images are where you will often find the most damage.

Good: This is the grade given to coins that were circulated for exorbitant periods of time. After decades upon decades of exchanging hands, these coins have a lot of damage to show for it. Complete with chipping, scratching, and many other imperfections, these pieces really show their age.

When it comes to giving coins like the 1915 Barber Quarter a price, there are but two things that you must take into consideration. First, you have to consider what type of coin it is. Because multiple types of Barber Quarters were minted most years, this is the first factor affecting price. Secondly, the condition of the coin is everything. For collectors, a coin that is in excellent condition is one that they are willing to pay a high price for, sometimes drastically higher. The chart below will give you a good idea of what the typical asking prices are for graded 1915 Barber Quarters.