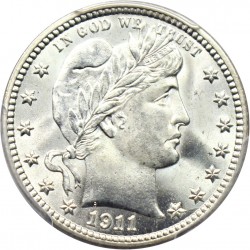 The US Mint has produced America’s coinage for well over 200 years and has made quite a name for itself amongst collectors both domestically and those from all over the world. While there are many beautiful coins that are credited to the US Mint, few are more sought after by collectors than Barber Quarters.

San Francisco returned to minting Barber quarters in 1911, after a short hiatus in 1910. With that said, less than 6 million Barber quarters were made in 1911, and, of course, far fewer remain today than when they were made. Philadelphia minted almost 4 million 1911 Barber Quarters, while Denver and San Francisco were under a million each.

Produced throughout the late 19th and early 20th century, the Barber Quarter played a major role in the lives of everyday Americans. Nowadays, these coins are sought after for their collector value. Though every collector would like to add one of these coins to their lot of coins, it is not always so easy to do so.

Because the Barber Quarter was produced over a century ago, collectors are wary about purchasing them simply because condition cannot be guaranteed. For this reason, you will see collectors searching high and low for those Barber Quarters that have been well-preserved through the years. Unfortunately, it is not always such an easy task to find a well-preserved Quarter.

While most people would opt to send their Quarters away for grading to determine their official condition, most people have neither the time nor the money to do this. Instead, you will find below an outline of the characteristics of graded coins as to gain a better idea of what coins of certain grades look like.

Uncirculated: For a coin to be graded Uncirculated, it will have had to spend no time at all on the open exchange market. Because of their remaining in safekeeping throughout their lives, Barber Quarters that are Uncirculated are some of the most desirable in the eyes of collectors. As you could have probably guessed, Uncirculated Quarters are also those that carry the largest price tags.

Extremely Fine: To receive this grade, the coin in question will have only spent a very limited amount of time in circulation. These coins will, at first glance, appear to be absolutely pristine, but under closer inspection you will be able to find some minor imperfections and extremely light wear. Though not of the highest grade, Extremely Fine Barber Quarters are still heavily sought after by collectors.

Fine: A coin given the grade of Fine is one that was in circulation for a good bit of time, but did not incur large amounts of damage. Though there will be consistent light scratching on the coin’s surface, it will not be so heavy that the integrity of the coin’s design will have been compromised. Even in this condition, Barber Quarters are still prized in the eyes of collectors.

Good: Good is the grade given to Barber Quarters that spent decades upon decades in circulation and were heavily damaged along the way. Because the Barber Quarter was such a popular coin, this grader is not all that uncommon. Still, these coins are sought after by collectors simply because of their age and historical significance.

For coins as old as the 1911 Barber Quarter, there are a few factors you must first consider before you can understand what you can expect to pay for one. First, the condition of the coin means everything. Naturally, coins that are in better condition will sell for higher prices than those in poor condition. Being that 2 to 3 different types of Barber Quarters were minted during most years, you will find that the specific type of Quarter you have also plays into how much you will pay for it. The chart below will give you a better idea of what you might be asked to pay for a Barber Quarter from 1911 given its type and grade.