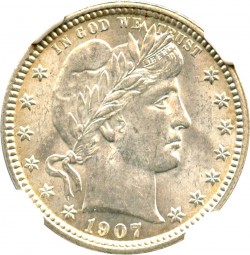 The US Mint has been producing the coinage of the United States for some time now. Since shortly after the country was founded, coins have been rolling off the mint’s presses, many of which have risen to popularity once their production was ended. A perfect example of this is the Barber Quarter, which has recently risen to new levels of popularity.

Collectors come in many shapes and sizes, but a universal fact is that all of them prefer their coins to be in the best possible condition. You will find that collectors, before buying a particular coin, will carefully analyze every aspect of it to ensure that they are getting their hands on an excellent piece.

Normally, someone who would like to have the condition of a coin judged would send the piece away for grading. Realistically, however, not everyone has the funds and time to send their coins away for grading, so we have provided below a bit of an outline that will hopefully better describe what kind of characteristics coins of specific grades will have.

Uncirculated: A Barber Quarter that is graded as being Uncirculated is one that never saw any time exchanging hands. These coins appear to be in perfect condition because they were put into safekeeping shortly after the time they were minted. These coins are the most desirable because of their excellent condition, but are also some of the most expensive for that same exact reason.

Extremely Fine: A coin that is given this grade is one that was circulated for only a very short period of time. Though some light wear and tear may be able to be noticed under close inspection, these coins appear to have been well-preserved. All of the notable imagery and raised aspects of the coin are intact, giving the coin particular appeal to collectors.

Fine: A coin that is graded to be Fine has been through plenty of circulation, but did not incur an exorbitant amount of damage during that time. These coins will show some light wear and tear around the raised aspects of the coin, but that wear will be light in nature. Scratching is also common on these coins, but it will also be light more often than not.

Good: This is the grade given to those coins that have been circulated more than any other. These coins will be complete with heavy wear and visible signs of damage. The damage found on the faces of these coins can vary dramatically, but includes anything from scratching, to chipping, and, on occasion, actual bending of the coin.

When it comes to giving the Barber Quarter a price, there are a few things you have to look at. First, the condition of the coin means everything. Naturally, those coins that have been well-preserved over the years will carry a higher price tag than those that have been beaten up. Secondly, because there were 2 to 3 types of Barber Quarters minted annually, the specific type will also play a major role in determining price. The chart below is aimed at giving you a better idea of what you can expect to pay for a 1907 Barber Quarter given its condition and type.