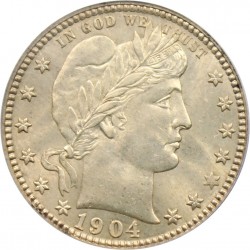 The US Mint has produced many coins throughout the years, and many of them have gone on to become popular collector’s items. One of those pieces was the Barber Quarter series that was first produced back in the late 19th century. These coins were not only incredibly useful, they were beautiful in their design.

The 1904 Barber Quarters are generally common, though 1904 saw fewer issued than usual, as only the Philadelphia and New Orleans (O) mint were involved in production that year. Still, enough Barber quarters were produced to keep the commerce wheels of the early 20th century spinning and coin collectors of the modern day pleased.

Nowadays, collectors are constantly trying to get their hands on these coins because they would like to make complete collections. Being one of the earlier releases, the 1924 Mercury Dime is especially popular. Of course, for collectors it is all about the overall condition of the coin.

For collectors, it doesn’t matter what coin we are talking about when we express that condition means absolutely everything. Collectors are always looking for the most well-preserved pieces, and the Barber Quarter is no exception. By closely analyzing every facet of the coin, you can gain a better idea of its grade.

Normally, coins such as the 1904 Barber Quarter are sent away to professional companies for grading, but we understand that not everyone has the ability to do this. Understanding this, we have provided below an outline of specifications regarding what you can expect a coin of a particular grade to look like.

Uncirculated: An Uncirculated 1904 Barber Quarter is, by nature, one that spent absolutely no time as currency being exchanged on the open market. Having instead been kept in a safe place over the years, these coins will show absolutely no signs of wear and will appear quite beautiful. As you could have probably guessed, Dimes in this condition are the ones investors want more than any other.

Extremely Fine: A Quarter graded to be Extremely Fine is one that spent time exchanging hands briefly. Though you will definitely be able to see some signs of wear on the coin’s faces, the wear present will generally be quite light in nature. Judging with the naked eye, these coins appear to be in excellent condition, and for the most part, they are.

Fine: This grade is given to those Barber Quarters that spent a decent amount of time being circulated. While it is true that they were exchanging hands for quite a few years, the wear you will find on their faces is not so heavy that the coin’s appeal is taken away. With that being said, the heaviest spots of wear will be found on and around the coin’s raised features.

Good: This is the grade given to those Quarters that were circulated more heavily than any other. These coins will show plenty of wear and will sometimes even be chipped, scratched, or scraped. Though they are in not-so-great condition, these coins are still sought after by collectors from all over the world.

As is the case with any coin, in order to accurately determine a price, you must first consider a few different factors. For one, the Barber Quarter had a few different types created each year, so you must first take into consideration what type is rarest. After that, you must then assess the condition of the coin. If the coin in question has been well-preserved, it will naturally carry a heftier price tag. Below is a chart aimed at giving you a better idea as to what you can expect to pay for a Barber Quarter given its condition and type.