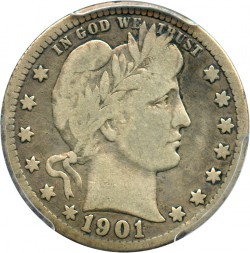 Though Barber Quarters are no longer being produced, they have grown to be extremely popular amongst coin collectors. It goes without saying that this is one of the most popular Barber Quarter releases on the market. Unfortunately, because of the coin’s age, you will find that more often than not they are in pretty rough shape.

When collectors think about purchasing a coin such as the 1901 Barber Quarter, the first thing they will concern themselves with is the condition in which the coin is in. Condition not only affects value, but it also affect the general appeal of a collection, so collectors would like to buy those coins that haven’t been too heavily damaged.

Normally, judging the condition of a coin is something best left to the professionals, but not everyone has the time and money to send their coins away for grading. Understanding this, we have provided below a listing of the different characteristics of graded Barber Quarters as to give you a better idea of what graded pieces might look like.

Uncirculated: An Uncirculated Barber Quarter is one that never was released into the open exchange market. Instead of changing hands over and over for decades like most Dimes did, these pieces were kept under lock and key and avoided most any damage. Even the mint’s original luster is still present on the coin’s faces.

Extremely Fine: A coin receiving this grade is one that was only put into circulation for a short period of time. During that time, the coin in question will have suffered some damage, but not enough to really take away from its appeal. Apart from some light scratching that is only visible under close inspection, these coins appear to be well-preserved.

Fine: If a coin is graded to be Fine, the coin in question is one that has spent a good bit of time being circulated. These coins will show a good bit of damage, but not so much that you cannot make out major identifying features such as the images and inscriptions.

Good: This is the grade given to coins that are in poor condition. These pieces, during their lives, were circulated for decades upon decades and have incurred a lot of damage during that time. For collectors, these are not the most desirable pieces, as seen by their relatively inexpensive asking prices.

For coins like the Barber Quarter, the price you are going to pay is dependent on a few different factors. For one, the type of Quarter it is will play very heavily into how much the asking price is. Because different types of Quarters were minted every year, their individual scarcities play into the asking price. In addition, you will need to pay attention to the coin’s condition. Quarters that are in excellent condition are the ones going for the highest prices.