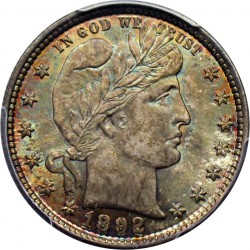 The 1892 Barber Quarter was the first coin of the series, it was minted from 1892 through 1916. The Barber Quarter struck 3 editions this year: 1892 (Philadelphia), 1892-O (New Orleans) and 1892-S (San Francisco). As with all first year type coins, the 1892 Barber quarter is popular among coin collectors. For those who venture on collecting an entire date-and-mintmark run of Barber quarters, 1892 presents few challenges, with the exception of the scarce and valuable proof quarter.

The 1892-O Barber Quarter was the first year that the New Orleans Mint issued a Barber Quarter. The 1892-S Barber Quarter minted in the San Francisco Mint is the rarest and most valuable, as less than 1 million were minted. The mint mark is on the reverse under the eagle.

Of course, as is true of most coins as old as the Barber Quarter, the condition of the coin in question means everything to collectors. This is why you will see collectors paying top-dollar for those Quarters in excellent condition. As mentioned above, multiple different types of Barber Quarters were produced every year, so that also plays a role in determining how much you will pay for one of these coins.

When it comes to coins as old as the 1892 Barber Quarter, the first thing collectors concern themselves with is the condition of the coin. These pieces of currency were especially useful to US citizens at the time of their production, so it goes without saying that they incurred a lot of damage throughout the years. Because of the broad spectrum of damage that these coins could have been subjected to, it makes sense that collectors pay very close attention to the condition of the coin.

When it comes to officially judging the condition of a coin, this is a process known as grading. Normally, grading is performed by a professional company that utilizes the opinion of experts, but the specifications below can give you a good idea of what certain graded Quarters will look like.

Uncirculated: An Uncirculated 1892 Barber Quarter will appear to be in nearly perfect condition. These coins were not circulated at all, and because of this did not incur any damage that is typically found on coins so old. Having been very well-preserved through the years, it is very easy to see why collectors jump at the opportunity to get a 1892 edition in such great shape.

Extremely Fine: If a coin is receiving of an Extremely Fine grade, it means that they were circulated for nothing more than a very short period of time. During their light circulation, these coins will have incurred some damage, but it will be mostly light in nature. In fact, the damage can most often only be seen under extremely close inspection.

Fine: A 1892 Barber Quarter that is given this grade is one that was circulated for a moderate amount of time. Though these coins were definitely exchanging hands for multiple years, they were able to avoid most major damage during that time. Though some of the imagery and inscriptions will have begun to fade, the coin appears to be in decent shape for how old it is.

Good: If the coin you have is graded to be Good, it will be in pretty rough shape. All in all, the coin will be host to a lot of damage including scratching, chipping, and many other blemishes.

For coins that are as old as the 1892 Barber Quarter, one of the biggest determinants of price is the condition the coin is in. Most of these pieces have suffered some heavy damage, so that is why collectors will inspect their condition closely. The chart below is aimed at giving you a better idea of what you might pay for a 1892 Barber Quarter given its grade. Because multiple editions of the Quarter were minted every year, the exact type of Quarter you have will also affect the price.