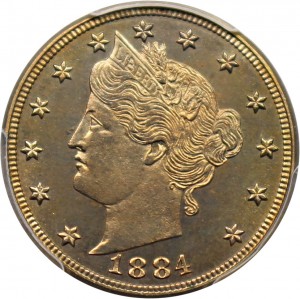 The 1884 V-Nickel was the second year of this incredible design change which was hailed as magnificent. This V-Nickel (often referred to as Liberty Head Nickel) replaced the long standing, production problematic, Shield Nickel. This coin was produced in large quantities from 1883 until 1913.

Despite the fact the V-Nickel series ran for 30 years, the set is compact and attainable, largely because of the branch-mint issues. Accordingly, it is widely collected by date and mint, though many do collect it simply by type. Proofs were made in every year, always in the thousands, a high level for that period.

For collectors, it is always a goal to find coins in the best possible condition because no one wants to boast a collection of coins that is grim. With regard to the 1884 V-Nickel, finding one in great condition is no simple task.

Coins that are as old as the 1884 V-Nickel are always having their condition analyzed. The reason is due to the fact that collectors will only want to purchase the coins that have been well-preserved. By closely analyzing the condition a coin is in, you are really giving the coin a grade of sorts.

Typically, grading is performed by a professional company that utilizes expert opinion, but by using the specifications below you can gain a better idea as to what qualities a coin of a specific grade will possess.

Uncirculated: An Uncirculated 1884 V-Nickel will have no signs of wear because the coin itself was never circulated. With all of its texture, coins of this grade will feel as though they were just minted. Adding to the appeal, the piece will have retained all of its original luster.

Extremely Fine: An Extremely Fine 1884 V-Nickel is one that was in circulation for a period of time, but not a very long one. This type of coin will show some wear and some small scratches, but for the most part will be in pretty good condition. Even some of the mint’s original luster will be preserved on pieces receiving this grade.

Fine: Fine is a grade given to coins that show ample signs of wear, but not so much that it takes away from the coin’s overall appeal. The coin will have none of its original shine left and will be home to some smoothing. At the end of the day, all of the imagery and inscriptions will be able to be made out without too much trouble at all.

Good: A coin that is graded to be Good is one that saw heavy circulation. These coins will show the most wear and, in some cases, will be very beaten up. Heavy scratching, chipping, and bending are all associated with this grade. Despite its poor condition, Good 1884 V-Nickels are still a prize to a good amount of collectors.

For coins as old as the V-Nickel, pricing the piece becomes as important as giving it its grade. Seeing as the most sought after pieces are those that have been well-preserved through the years, collectors are willing to pay top-dollar for those pieces. To better understand the pricing scheme of the 1884 V-Nickel, refer to the chart below.