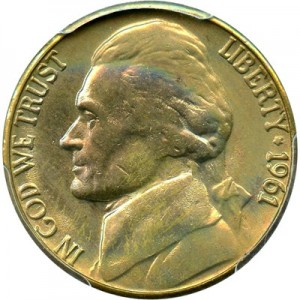 The Jefferson Nickel finds itself in the pockets of millions each and every day. This popular five-cent piece began being produced by the U.S. Mint in 1938, and has been produced ever since. While a nickel may not seem like a collectable coin, some Jefferson Nickels can have collectable value well beyond their face value.

For a coin collector to desire a Jefferson Nickel, however, the coin will have to be in pristine overall physical condition. Coins in excellent shape not only carry higher premiums, but they are also more pleasing to look at.

It is very important to note a coin’s physical condition, especially when dealing with coins that were minted several decades ago. Although these coins can have collectable value even if they are in lousy condition, serious coin collectors will usually only go for coins in excellent shape. Finding them can be difficult, however, especially as the coin gets older.

Grading can be a key element of a coin’s value. When you examine a coin, you are really trying to figure out how that coin might be graded by a grading company. Use the guide below to get a good idea of what a Jefferson Nickel might look like in different grades and conditions.

Uncirculated: Coins that are in uncirculated condition are considered to be the best by coin collectors, and with good reason. Because these coins have been handled only minimally, they will not have the usual wear and tear and damage that is seen on coins that have been circulated. In fact, these coins will appear pristine, and you would never guess their age by simply looking at them.

Extremely Fine: Coins in this condition are very pleasing to the eye, with no visible signs of age or wear. As such, collectors may also choose to obtain coins in this condition. These coins will, however, have some type of damage or imperfections that are usually only visible under a thorough visual inspection.

Fine: Many circulation nickels out there today will fall into this category. These coins have been widely handled and exchanged for decades. Countless exchanges have caused them to experience some wear and tear. Any surface damage is not enough, however, to significantly affect the coin’s images or text.

Good: Most Jefferson Nickels circulated today would be considered “good.” These coins have been heavily circulated and have been used in countless exchanges. They may have serious scratches, dents, divots or surface discoloration. Serious coin collectors will most shy away from these coins, rather trying to obtain coins in better overall condition.

The first step in gauging a coin’s potential value is identifying its type. In mint year 1961, three different types of this coin were produced. Secondly, you must get a good idea of the coin’s physical condition and how it might be graded by a professional. Coin condition is critical for coin collectors, and coins in excellent condition can sell for higher premiums than similar coins in good or fair condition. The chart below will show you what you might expect a 1961 Jefferson Nickel to be valued at based on its grade and type.