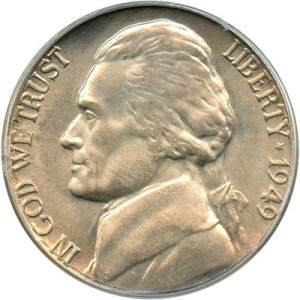 For a coin collector, however, a Jefferson Nickel may only be worth obtaining if it is in excellent condition. These coins tend to be the most physically attractive and are usually worth the most money.

These coins have been used now for decades, and their condition must be closely inspected. While a coin in any condition may be valuable, coin collectors will often look for coins in near-mint condition. Finding coins in this top condition can be very difficult, however.

When you are inspecting a coin, what you are essentially doing is trying to determine how the coin may be graded. Coin grades are assigned by a professional coin grading company; however, you can use the guidelines below to get an idea of how a graded Jefferson Nickel may appear.

Uncirculated: Coins in uncirculated condition are highly sought after by coin collectors. Because these coins have never been used in circulation, they do not have the typical damage and wear and tear associated with circulation coins. Upon examination, these coins will appear as if they were freshly struck and have not been handled by human hands.

Extremely Fine: Coins that are assigned a grade of extremely fine are also prized by coin collectors. These coins will, however, have some slight surface damage such as scratches. Only under very close inspection will these imperfections be seen, however, and the coin at a glance will appear to be in mint condition.

Fine: Coins that have been assigned a grade of fine have been widely circulated and used, often for many years or more. While the coin’s imagery and details remain robust, the coin may have noticeable scratches or blemishes.

Good: Most of the Jefferson Nickels that are in use today are considered to be in good condition. These coins have been handled million of times over, and will have some significant imperfections on their surfaces. Coin collectors will often avoid coins in this condition, and will seek similar coins in superior condition.

To get an accurate idea of the value of a 1949 Jefferson Nickel, you must first determine what type of nickel it is. Mint year 1949 had four different types produced. Certain types may be far more valuable than others. In addition to the coin type, you must also assess the coin’s condition. Coins that are in superior condition will often sell for far more than similar coins in a lesser condition. The chart below will help you get a good idea on what you might expect to pay for a 1949 Jefferson Nickel based on the coin’s type and grade.