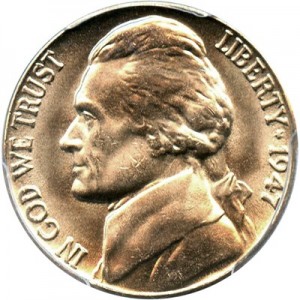 The five-cent piece has always been popular in the U.S. Beginning in 1938; the U.S. Mint replaced its Buffalo Nickel with the Jefferson Nickel. The Jefferson Nickel has since been produced for decades, and remains in production to this day. You may not think these coins have any value above their face value, but certain editions and mint years can have significant value to coin collectors.

For a coin collector, a Jefferson Nickel will likely only be worth the trouble if the coin is in top physical condition. These coins are generally not only the most valuable, but are also the most visually pleasing.

For any type of coin that has been around for over half a century, the coin’s condition will be critical in determining its value. While these coins may have some collectable value even in lower conditions, only the coins that are considered pristine are highly desired by coin collectors. Finding coins in top condition can prove difficult, however, given the amount of time these coins have been produced and circulated.

When you are examining a coin, what you are really doing is trying to figure out how the coin might be graded. While the grading process is performed by professional grading services, you can use the guidelines below to get a better idea of what a graded Jefferson Nickel may look like based on its condition.

Uncirculated: Generally speaking, this is the type of Jefferson Nickel that serious collectors are trying to acquire. These coins have never been used in circulation, and therefore should appear as if they are brand new, freshly struck and just released by the mint. A simple look at these coins will make you believe they are brand new and have not aged.

Extremely Fine: Extremely fine Jefferson Nickels will show some slight wear and tear, yet may still be highly regarded by coin collectors. These coins may only have some small surface scratches, and will still look to be in near-perfect condition. In fact, it is only under a very close inspection that the coin’s imperfections may be noticed.

Fine: Coins in fine condition have been widely circulated for some time, and they show it. These coins may have significant scratches or other blemishes. That being said, however, the coin’s imagery and text should still be fully intact and discernible.

Good: The vast majority of Jefferson Nickels on the market today will fall into this grade. These coins have been widely used and exchanged over the years, and will have obvious scratches or damage. Coin collectors may shun these coins in favor of coins in superior physical condition.

To get a reasonable estimate of the value of a 1947 Jefferson Nickel, you must first determine the type of coin. There were just three types produced for this mint year. In addition to the coin type, however, the coin’s condition will also be vitally important when determining its value. Collectors will look to buy similar coins in better condition, and the better the condition, the more valuable the coin will likely be. The chart below will give you a good idea of what you might expect to pay for a 1947 Jefferson Nickel based on type and condition.