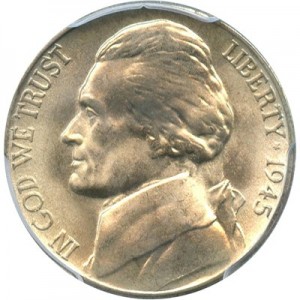 The 1945 Jefferson Nickel is the seventh edition of the Jefferson Nickel design, introduced in 1938 to replace the Buffalo Nickel. This year’s edition was also the last year of the so called “War Nickels” that contained silver rather than nickel in order to preserve the metal for the war efforts. The Jefferson design has been produced since 1938, and is still being produced today. While one might assume that these five-cent pieces are not valuable, they can have significant value above face based on year and condition.

For a coin collector, a Jefferson Nickel would likely only be worth acquiring if the coin is in excellent condition. Coins in top condition are generally the most valuable, and are also the most pleasing to the eye.

For coins that have been around as long as the Jefferson five-cent piece, you must focus on the coin’s overall condition. While coins may be valuable in any condition, it is typically only coins that look pristine that are highly coveted by coin collectors. Finding coins in this condition is not easy, however, given the amount of time these coins have been produced.

When you are inspecting a coin’s condition, you are in essence trying to figure out how that coin may be graded. While actual coin grades are assigned by professional coin grading companies, you can use the guidelines below to get a good idea of how a graded Jefferson Nickel may present itself.

Uncirculated: This is the condition that serious coin collectors are looking to acquire and add to their portfolios. Because these coins have never been used in circulation, they may have little to no damage or signs of wear and tear. These coins will, in fact, appear to be brand new, and will look as if they were just rolled from the mint’s presses the same day.

Extremely Fine: Coins in extremely fine condition may also be sought after by collectors. These coins will, however, display some very minor damage to surfaces or details. In fact, it is only under a very close visual inspection that one might see the coin’s blemishes or damage. To be assigned this grade, the coin will look to be in near-pristine condition.

Fine: Coins that are assigned a grade of fine are typically coins that have been used in circulation for a period of time. These coins will have damage to surfaces or details, although the coin s images and text will remain relatively clear and robust.

Good: Most of the Jefferson Nickels on the market today are said to be in good condition. These coins have exchanged hands countless times over many decades, and will have obvious signs of wear and tear or significant damage. Collectors may shy away from coins in good condition in favor of coins in extremely fine or uncirculated condition. The 1945 edition may still have some interest even in good condition; however, as it was the last series of “War Nickels” produced.

To determine an accurate price for a 1945 Jefferson Nickel, you must first determine the type of nickel it is. In 1945, there were six editions of the coin produced. For this particular year, the type of coin can have a significant effect on the coin’s value. In addition to the coin type, the coin’s condition will also play a role in the coin’s value. Coins in great to excellent condition may sell for much more than similar coins in fine or good condition. The chart below will help you get a good idea of what you may expect to pay for different types of this coin in various conditions.