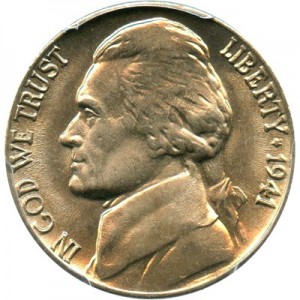 In 1938, the United States Mint replaced the Buffalo Nickel with the Jefferson Nickel five cent piece. The Jefferson Nickel has been produced for several decades, and is still being produced today. While a nickel may not seem valuable to collectors, certain types of Jefferson Nickels have significant value above and beyond their face value.

That being said, a collector will likely only be interested in obtaining Jefferson Nickels that are in excellent condition. These coins are not only the most valuable, but are also the most beautiful to look at.

For any coin that has been around for decades, you will have to carefully consider the coin’s overall condition. While some coins in poor condition may still be highly valued, it is usually only coins that are in excellent condition that are pursued by coin collectors. Finding coins in this condition can prove to be quite difficult, however, as they have been around so long.

When you are examining a coin, you are trying to determine the coin’s grade. While a coin’s actual grade must be assigned by a professionally recognized grading company, you can use the guide below to get a good idea of how your coin may be graded.

Uncirculated: Coins in this condition are the ones that collectors are most often trying to obtain. These coins have never been used in everyday circulation, and have maintained a near-perfect condition. Looking at these coins, they will appear to be brand new, as if they were just struck today.

Extremely Fine: Coins that are given a grade of extremely fine may also be highly coveted by coin collectors. These coins will, however, exhibit some minor wear and tear or damage. These coins will appear at a glance to be in pristine condition, although under closer examination you may seem slight scratches or damage.

Fine: Most coins given a grade of fine have been heavily circulated for some time. These coins will likely have surface scratches, although the coin’s imagery and details will remain fully intact.

Good: The majority of Jefferson Nickels on the open market today are considered to be in good condition. These coins have been used for decades, and they will clearly show some signs of use and damage. Collectors will often stay away from coins in this condition, although they may still be valuable based on their type and mintage.

To get an idea of your coin’s price, you must first determine the type of coin. There were several types of the 1941 Jefferson Nickel produced and the type of nickel will be a factor in its market value. The coin’s condition will also be a key factor when determining its value. Use the guide below to get an idea of what you might expect to pay for a Jefferson Nickel based on its type and grade.