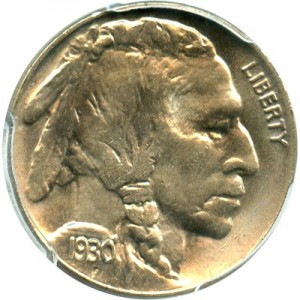 The Buffalo Nickel is one of the most popular coins ever produced by the US Mint. These coins were made during the early parts of the 20th century and were utilized by US citizens more than most other coins being circulated at the time. These coins are relevant today because collectors are constantly looking to add them to their collection.

The interesting aspect of the Buffalo Nickel coin series is that with each new, annual release came three different types of Nickel. This simple fact makes collecting these coins extremely difficult. Add the fact that not many of these coins have survived the years in great condition, and you have a large amount of collectors looking to acquire a relatively small number of coins.

For coins as old as the 1930 Buffalo Nickel, the first thing a collector will do is assess the overall condition of the coin. Because these coins were circulated so heavily, it goes without saying that many of them are not in the greatest condition. Seeing as people only want to purchase those coins that have been well-preserved throughout the years, collecting Buffalo Nickels is quite the task.

When it comes to officially judging the condition of a coin, this is known as grading. Normally, grading involves sending your coin away to a coin grading company, but not everyone has the time and the money to do that. Taking this into consideration, we have listed below the qualities usually associated with Buffalo Nickels of specific grades.

Uncirculated: A coin that is graded to be Uncirculated is one that spent no time exchanging hands. These coins will appear as though they were minted only a short time ago and will be free from any damage. The coin’s texture, including the raised images and inscriptions, will be wholly intact and looking perfect.

Extremely Fine: Coins that receive this grade are still in pristine condition, but they will show some light signs of wear from circulation. Light scratching can be seen on the coin’s faces, but only under extremely close inspection. These coins will have lost much of their original mint luster, but will appear nice and easy on the eyes.

Fine: A coin that is graded to be Fine is one that was circulated for a relatively extended period of time but did not get destroyed in the process. You will be able to make out a good amount of scratching on the coin’s faces, but they will not completely take away from the coin’s appearance. Some of the heaviest wear will be found near the Indian’s cheekbone and near the buffalo’s front legs.

Good: A coin that receives this grade is one that was circulated more than any other. These coins will show a lot of heavy scratching and might even have chips. Unfortunately, the amount of wear on the faces of these coins is such that the coin’s faces will have been worn smooth.