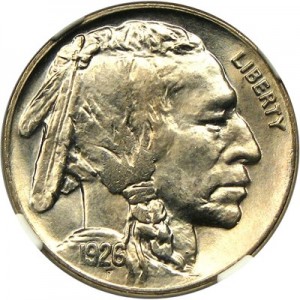 Since the days following the Civil War, the US Mint has produced 5-cent pieces known as Nickels. Though many different types of Nickels have been produced over the years, few are more popular than the Buffalo Nickel. This particular coin was produced throughout the early 20th century and is, nowadays, extremely popular in the eyes of collectors.

Because most Buffalo Nickels from 1926 saw many years in circulation, they are often in poor condition. This is why collectors immediately assess the condition of the coin. There are many different things that could have caused damage to these coins throughout the years, and even the smallest blemishes make a huge difference in the eyes of people who collect these coins.

When it comes to judging the condition of a coin, this is a process known as grading. Normally, grading is something that is done by a company that employs coin experts. Unfortunately, not everyone has the time and money to spend sending their coins away for grading, so you can use the specifications below to determine the characteristics attached to certain grades.

Uncirculated: A coin that receives this grade is one that never spent any time being circulated. These coins, though being nearly 100 years old, are in excellent condition and appear as though they were minted recently. Even some of the mint’s original luster will have been preserved, giving the coin a bit of a shine.

Fine: Coins that are graded to be Fine are those that were circulated for a decent amount of time. These coins will show some signs of wear, particularly near the Indian’s cheekbone and around the front legs of the buffalo. Because of the exchanging of hands, the faces of the coin will have been smoothed a bit.

Good: This is the grade given to coins that are in extremely poor condition. While the poor condition is definitely a drawback for collectors, it makes sense as these coins were used on a daily basis and incurred a lot of damage during that time. Even though they are pretty well beaten up, collectors are still constantly eager to get their hands on these coins.

When it comes to giving the Buffalo Nickel a price, you can look most closely at the condition the coin is in. Collectors will naturally pay more money for coins in better condition. In addition to the overall condition of the coin, collectors put a lot into the type of coin it is. Seeing as three different versions of the coin were minted most years also plays into the price of the coin. The chart below can give you a good idea as to what you can expect to pay for a Buffalo Nickel of a certain grade.