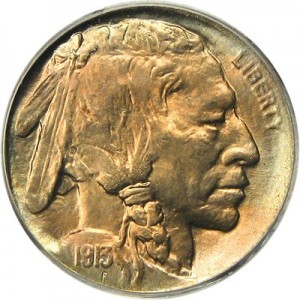 The Buffalo Nickel is one of the more intriguing coins produced by the US Mint. For the first edition, the 1913 Buffalo Nickel, there are 6 different varieties. Consisting of two different style coins minted across 3 US minting facilities, the price of one of these coins will depend first on the type, secondly on where it was produced, and lastly on condition.

Regardless of what type of Buffalo Nickel a collector wants, it goes without saying that a coin in great condition is preferred over one that has been worn and damaged. Buffalo Nickels were minted for a long time, but the first edition is still the most popular year.

For coins that are more than a century old like the 1913 Buffalo Nickel, the first thing collectors will do is assess the coin’s condition. Seeing as the Nickel was an incredibly useful coin for American citizens, those that have survived until today often appear tattered and worn.

When judging the condition of a coin, what you are really doing is giving that coin a grade. In all reality, grading a coin is nothing more than defining the coin’s condition with a one or two-word description. The specifications below will tell you what characteristics apply to Buffalo Nickels of a specific grade.

Uncirculated: An Uncirculated Buffalo Nickel will show absolutely no signs of wear. These coins never spent any time being exchanged from person to person, and as such do not show any sign of wear or damage. Even the original mint luster will be present on the coin’s surface; giving it an appealing shine.

Extremely Fine: Extremely Fine 1913 Buffalo Nickels appear to be in perfect condition, but upon closer inspection it is apparent that some damage occurred during its short time in circulation. Near the Indian’s cheek and the buffalo’s front leg/hip you may be able to see some wearing of the luster, as these raised parts of the coin’s face were the quickest to succumb to wear.

Fine: Coins of this grade will show plenty of wear, but they will still be mostly in good condition. Though there may be a good bit of scratching on either side of the coin, the scratching will be light in nature and will not necessarily take away from the imagery and inscriptions.

Good: Coins in Good condition are some of the most beat-up coins on the market. Because they were circulated for many, many decades after being minted, these coins will be complete with heavy scratching and chipping. The boundaries separating the images and inscriptions from the rest of the coin will also be a bit worn.

When it comes to giving a coin like the 1913 Buffalo Nickel a price, you mustn’t look much further than the condition and grade of the coin. Seeing as the most sought after pieces are those that have been well-preserved through the years, collectors are willing to pay top-dollar for those pieces. With this particular coin, the type and where it was minted also heavily factor in to how much you will be paying for a single coin. The chart below will help you better understand how much you will pay for a graded 1913 Buffalo Nickel.