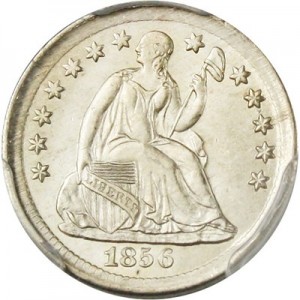 The seated half dime features Liberty sitting on a rock holding a shield and is sought after by both dealers and collectors alike. These coins were last minted in 1873 and the series does have its share of rare coins. Many of the coins produced in the 1860s are difficult to obtain and coins that were minted in New Orleans may also be desired.

The value of a seated half dime can vary significantly depending on its condition, mint year and minting location. In addition, the type of coin is also a significant consideration in determining its value. An 1856 Seated Half Dime in good condition may trade for about $10 per coin. An 1853-O edition with no arrows may trade for almost $1500 per coin. If you have a Seated Half Dime that appears to be in excellent physical condition or is of a series that is considered rare, you may want to consider having your coin graded by a professional coin grading company such as PCGS or NGC.

By having your coin graded by a professional numismatist, you may be able to get a much more accurate idea of the coin’s overall condition and fair market value. Because the grading process is so through and intense, grading companies can account for even very minor imperfections in your coin. Besides the benefit of having the coin’s condition professionally graded by a team of experts, the grading company will also verify the coin’s metal content and authenticity.

Seated Half Dime Value is Conditional

The Seated Half Dime Mintmarks

This coin series has a number of rare mintmark and date combinations. Coins that were produced by the Philadelphia Mint do not contain a mintmark. Coins that were produced at mint branches, however, will have their mint location denoted. “S” is for the San Francisco Mint and “O” is for the New Orleans Mint. These mintmarks may be found on the coin’s reverse either above or below the wreath. Coins with either the “S” mintmark or the “O” mintmark may be scarcer than coins with no mintmark.

Seated Half Dime Values May Rise In The Future

Because of their age and with some editions being considered rare, the value of Seated Half Dimes may potentially increase in the future. These coins have many editions today that are affordable and may possibly increase in value in the future, making them a great possible starting point for new coin collectors.