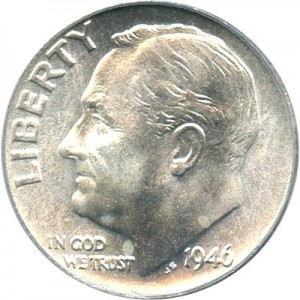 First produced in 1946, the Roosevelt Dime was an immediate hit in post-WWII America. Nowadays, the coins are valued due to their silver content, but are collected so long as they are in excellent condition. Thanks to these coins being minted not all that long ago, collectors have the luxury of being especially picky about the condition of the coin(s) they would like to purchase.

Despite there being millions upon millions of Roosevelt Dimes collected and preserved, only a portion of those coins have been preserved in excellent condition; and it is these few that collectors are after.

What You Will Pay For a Roosevelt Dime

The price you are going to be asked to pay for a specific Roosevelt Dime is completely dependent upon who is selling it and what the coin looks like. Generally speaking though, these coins are affordable for most any type of collector simply because so many still exist.

On the open market today, you can expect to find Roosevelt Dimes ranging in price from as little as $1 to as much as $4 in absolutely pristine condition. Some other editions of the coin sell for even higher prices in excellent condition, but most often you will come across the $1-$4 price range. This may not seem overly expensive, but proportionate to the ten-cent face value of the coin, a $3 asking price is quite a jump.

The Most Desired Roosevelt Dime

When it comes to Roosevelt Dimes, an almost universal truth is that any collector will want to purchase the coin in excellent condition. If we are speaking in terms of official coin grading, it is the Uncirculated pieces that are most desired by collectors. The pieces that were almost immediately put under lock and key after minting are so desired because of their appearance. Taking on the look of a coin that was minted recently, these pieces are truly a wonder to behold.

When holding and viewing these coins, you will notice that all of the coin’s raised imagery and inscriptions are perfectly intact. If this coin was extremely aged and had been heavily circulated, the surfaces of the coin would be void of texture and generally smooth to the touch.

By closely analyzing the surfaces of a given coin, you are able to determine a rough grade. If the coin in question is shiny and fully of texture, the chances that it is an Uncirculated piece are somewhat high. The only way to officially know the grade of a coin is to have it judged by a professional company, but a keen eye will be able to pick out imperfections and other things that may detract from the overall value.

Though it is impossible to predict the value of Roosevelt Dimes many years down the road, history has shown us that coins like this only become more expensive to acquire as time moves on. In the case of the Roosevelt Dime, the fact that the coin has not been produced since the 1960s means that, with each passing year, there are only going to be fewer and fewer coins on the market. For this reason, there has never been a better time than now for you to get your hands on a well-preserved Roosevelt Dime. If you find yourself sitting here ten years from now looking to make a purchase, do not be surprised if the price of the coin has gone up dramatically.

In addition to there simply not being that many Roosevelt Dimes left on the market with each year that passes, there will be even fewer well-preserved coins, so now is really the time to act.