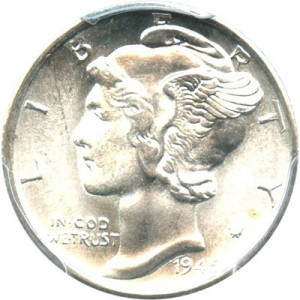 The US Mint was founded all the way back in the late 18th century, and since then has built up quite a positive reputation that now extends around the globe. Still tasked with the production of US currency, the US Mint has evolved into an organization that also produces the coinage of many other countries as well.

One of the most iconic coins ever produced by the Mint is known as the Mercury Dime and was minted during much of the first half of the 20th century. These Dimes have since been taken out of production, but they remain extremely popular in the eyes of collectors both at home and abroad.

If you are talking about the Mercury Dime from 1945 or any other year, one of the first things you will hear a collector ask about is the condition the coin is in. Naturally, when completing collections, collectors aim to add only well-preserved coins. Because of the age of the 1945 Mercury Dime, however, finding one that has been well-preserved is not always an easy feat.

Normally, having a coin graded is the best way to determine official condition, but not everyone has the time and money sitting around to send x-amount of coins away for grading. Understanding this, we have provided below a listing of the characteristics you can expect coins of a certain grade to have. This will give you a better idea of assessing the actual condition of a coin you might want to purchase.

Uncirculated: By nature, any coin that is graded as being Uncirculated is a coin that must have spent no time exchanging hands. Because of this, these coins will appear as though they were recently minted and will have no surface damage whatsoever. Because of their more or less perfect condition, it shouldn’t come as much of a surprise that these are some of the most sought after types of Mercury Dime.

Extremely Fine: For a coin to be graded as being Extremely Fine, it will have to have only spent a limited amount of time in circulation. Through the coin’s time being exchanged, some light damage had time to accrue, but not so much that the surfaces of the coin are tattered and hard to make out. In fact, without looking closely these coins will appear to be more pristine than anything else.

Fine: For a coin to receive this grade, it will have had to have spent a good amount of time in circulation. During this time some damage will have happened, but for the most part the imagery and texture of the coin will remain intact. Still popular amongst collectors, these coins do show their age.

Good: Good is the grade given to Mercury Dimes that were circulated for extended periods of time and incurred a lot of damage during that time. These coins will suffer from extreme scratching, bending, and chipping. Though in fairly rough shape, collectors still jump at the opportunity to get their hands on this Mercury Dime; especially if they are trying to put together a complete set of the ten-cent coin.

If you would like to find out how much you might pay for a Mercury Dime, you must take a few things into consideration. First, the condition of the coin means everything. If your coin is well-preserved, it will naturally carry a higher price tag—that much is an undeniable fact. Secondly, because there were multiple types of Mercury Dime minted every year, the exact type of coin will also affect the price asked for it. Below is a chart aimed at giving you a better idea of how much you might be asked to pay for a Mercury Dime from 1945 given its type and condition.