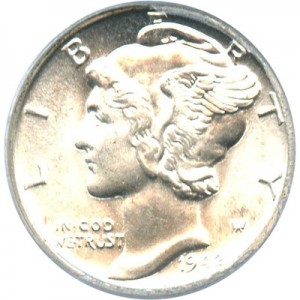 The US Mint has been producing the coinage of the United States since the country was founded some 200+ years ago. At first, the mint was only tasked with producing coins for the newly formed nation, but before long the US Mint was producing coins for countries all over the world. Through the years, and through the production of seemingly countless coins, there are certain coin designs that resonate with collectors more so than others.

One of those designs is the Mercury Dime, which was first produced through the first half of the 20th century. Though these coins are no longer being minted, they are still around and still quite popular in the eyes of collectors everywhere. For collectors, putting together a complete set of Mercury Dimes is a task that may seem impossible, but is one that can be accomplished without too much trouble at all.

When it comes to the Mercury Dime, the first thing any collector will look at is the condition the coin is in. These coins are quite old, so it comes as no surprise that many of them are in poor shape after having been circulated for decades at a time. While many Mercury Dimes are found in poor condition, many more are found excellently preserved.

Normally, a person who would like to know the exact condition of a coin will send it away for grading. Unfortunately, not everyone has the time and money laying around to send a coin away for grading, so we have provided below a list of specifications that will help you understand what characteristics are tied to coins of specific grades.

Uncirculated: A Mercury Dime that is graded as being Uncirculated is one that spent no time exchanging hands and never had the opportunity to incur damage. These coins will appear to be wholly pristine as their imagery and inscriptions will be left untouched. For being decades old, an Uncirculated Mercury Dime will more aptly resemble a coin that was just recently minted.

Extremely Fine: Extremely Fine is the grade given to Mercury Dimes that have been circulated for a small amount of time. During their short time exchanging hands, the amount of damage incurred by these coins is going to be very light. In fact, any damage that is one the faces of the coin will only be able to be seen under close inspection.

Fine: A coin graded to be Fine is one that spent a decent amount of time being circulated, but was taken out of circulation before heavy damage occurred. Though you will be able to make out a lot of light scratching, the coin’s overall appearance is not completely detracted by the wear. Overall, Mercury Dimes graded as being Fine are highly sought after by collectors of all types.

Good: This is the grade given to Mercury Dimes that are in the worst of the worst condition. These coins spent a long time in circulation and have incurred a lot of damage as a result. Though in poor condition, collectors who are looking to piece together an entire set of Mercury Dimes will still want to get their hands on even a Good graded coin.

If you are trying to get a better idea of what you might be asked to pay for a graded Mercury Dime, there are a few things you must think of first. For one, the condition of the coin means everything. If you are in possession of a Mercury Dime that has been well-preserved, you will naturally be able to ask for a higher price. Secondly, because there were up to three types of Mercury Dimes minted every year, the exact type of Dime you are in possession of will also play a role in determining the price. Below is a chart that will give you a better idea of what you can expect to pay for a Mercury Dime given its condition and type.