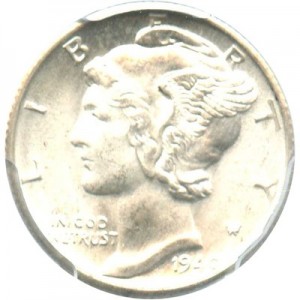 The US Mint has been tasked with the production of US coins since it was founded in the late stages of the 18th century. At first, the Mint was a small entity producing only the coinage for the newly formed United States, but is today tasked not only with producing the United States’ currency, but also the currencies of various countries from around the world as well.

One of the most beautiful coins produced by the US Mint is the Mercury Dime, which was in production through the first half of the 20th century. This coin is no longer being produced, but is valued today by collectors from around the world. The thing about these particular coins is that collectors only want them in top condition, though this is not always an easy task to accomplish.

Numismatists are the type of people who nit-pick, especially when it comes to coins. Because the condition of coins is everything, you will find that collectors pick apart every aspect of a coin, looking for even the smallest imperfections. The logic behind this level of scrutiny is that only well-preserved pieces are preferred to be added to collections.

Uncirculated: An Uncirculated Mercury Dime is one that spent no time in circulation and was instead kept in a safe place immediately after being produced. These coins will appear as though they were just minted, with no signs of wear and all of their images and inscriptions entirely intact. As you probably could have guessed, Uncirculated Mercury Dimes are the most sought after because of their sheer beauty.

Extremely Fine: A Mercury Dime receiving of an Extremely Fine grade is one that spent only a limited amount of time exchanging hands. These coins will, at first glance, appear to be Uncirculated, but upon closer inspection you will be able to make out small imperfections on the faces, including extremely light scratching. Also a prize for collectors, these coins are in high demand.

Good: A coin that is graded to be Good is one that spent an exorbitant amount of time in circulation. As a result, you will see a lot of heavy scratching as well as plenty of other noticeable signs of wear and tear. Though not the most sought after, Mercury Dimes graded to be Good are most common and are some of the cheapest you will find.

In order to give the 1940 Mercury Dime, or any Mercury Dime for t hat matter, an accurate price valuation, you are to consider two factors. First, you must consider the type of Dime it is. Because up to three different types of Mercury Dime were produced annually, the rarity associated with your coin’s specific type is what plays into the price first. Secondly, the condition of the coin will play into the price you pay. As you could probably guess, coins that are in the best condition are the ones that will sell for the highest prices. Below is a chart that will give you a better idea of what you might be asked to pay for a 1940 Mercury Dime given its type and condition.