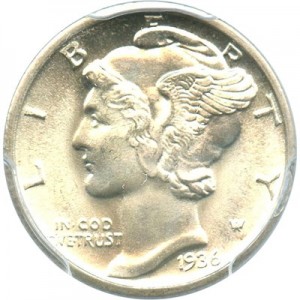 One of the undeniably beautiful productions of the US Mint is the Mercury Dime, which was produced throughout much of the first half of the 20th century. Though no longer in production, the Mercury Dime is still extremely popular amongst collectors both from the United States and from around the world.

While the Mercury Dime is quite popular, most collectors will settle for nothing less than a coin that has been extremely well-preserved. Naturally, finding coins that are more than 70 years old is a bit difficult, so it goes without saying that those well-preserved pieces carry quite a large price tag.

No matter the type of collector, the condition of a given coin is absolutely paramount. Because no one desires to add poorly-preserved coins to their collection, most collectors will not rest until they have a complete collection of pristine coins.

Under normal circumstances, a collector looking to ensure that their collection is in tip-top shape will send his coins away for grading. Unfortunately, not everyone has the time and money to send their coins to a professional company to be graded, and for that reason we have provided an outline below which explains the basic characteristics tied to coins of a specific grade.

Uncirculated: Uncirculated coins are considered to be the most desirable because they have spent no time exchanging hands and, as such, have not been damaged or worn whatsoever. Though they were produced more than 7 decades ago, Mercury Dimes graded to be Uncirculated will appear as though they were just rolled off the press a few weeks ago.

Fine: A coin that is graded to be Fine is one that saw a moderate amount of time in circulation, and incurred a good bit of damage as a result. Though you will be able to quite easily make out wear and tear, these coins are in relatively great condition when you consider how old they are. With all of the imagery and texture of the coin intact, a Fine Mercury Dime is a great addition to any collection.

Good: This is the grade given to those coins that were circulated for decades upon decades. As a result of their extremely elongated circulation, coins graded to be Good are home to a lot of significant wear, including heavy scratching, chipping, and any number of other deficiencies. Despite their poor appearance, even Mercury Dimes in this condition are sought after by collectors.

If you are attempting to get a better idea as to what you might pay for a graded 1936 Mercury Dime, there are a few things you must first consider. First, because multiple types of the Dime were minted most years, the level of scarcity associated with the particular type of Dime is the first determinant of price. After that, you can turn to the condition of the coin. As you could have likely guessed, Dimes that have been well-preserved and are in great condition will sell for much more than those Dimes that have been circulated extensively.