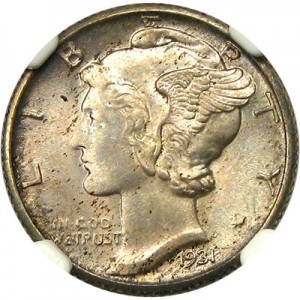 The US Mint was established more than 200 years ago, and during the time between then and now it has built quite the worldwide reputation. Emerging from humble beginnings, the US Mint has become an expansive organization that produces not only coins for the United States, but for many other countries around the world. Of all the coins produced by the US Mint, few are more sought after than the Mercury Dime.

Produced during the first parts of the 20th century, the Mercury Dime played a pivotal role in the day-to-day financial lives of US citizens. Circulated for many decades, the Mercury Dime is now seen as a piece of American history, and thus a collector’s item. While there exists a massive demand for Mercury Dimes, that demand is almost impossible to satisfy once you consider the limited quantities of these coins that remain.

The 1931 Mercury Dime, like all of this type of coin, was produced a fairly long time ago, and has thus been subjected to plenty of damage over the years. When collectors acquire these coins, the first thing they assess is the condition the coin is in. Naturally, those well-preserved pieces are the ones most highly sought after by collectors.

Realizing that not everyone has the time and money to send a coin away for grading, we have provided below a basic outline aimed at more accurately explaining the characteristics of a coin of a particular grade. By using these specifications, you can derive a rough grade for the coins you own or are thinking of owning.

Uncirculated: Uncirculated Mercury Dimes are those that, after being produced, spent many years in safekeeping; exempt from damage and wear. Though they were produced well over 70 years ago, these coins take on the appearance of newly produced pieces. As you could have guessed, these are, by far, the most appealing Mercury Dimes in the eyes of collectors.

Extremely Fine: A coin deemed to be of Extremely Fine grade is one that spent only a short period of time exchanging hands. These coins will show some wear and tear under extremely close inspection, but are for the most part free of damage. Collectors are also willing to pay top-dollar for coins of this grade.

Fine: A coin receiving of this grade is one that spent a fair amount of time being circulated. Having incurred some noticeable damage, these coins show their age quite aptly. With that said, for their age they are still in fairly good condition. The heaviest and most noticeable wear will undoubtedly be present on the raised aspects of the coins design more so than anywhere else.

Good: This is the grade given to those coins that have been extremely heavily circulated. Through their time exchanging hands, quite a bit of damage and wear has accrued on the faces of the coin. Though in fairly rough shape, even 1931 Mercury Dimes in Good condition are considered to be a great addition to any collection.

When it comes to figuring out how much one might pay for the 1931 Mercury Dime, there are a few different things that you must consider. First, because there were multiple types of the Dime produced most years, the rarity associated with the specific type of Dime will be the first determinant of price. Secondly, you will have to consider the condition the coin is in. If you find a well-preserved piece, you can bet that it will sell for more (sometimes a lot more) than coins in poor condition. Below is a chart to help you gain a better understanding of what you might pay for a Mercury Dime from 1931 given its condition and type.