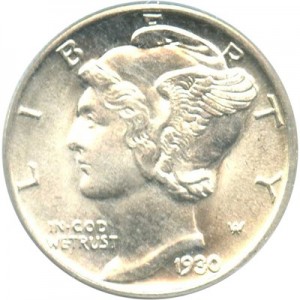 The US Mint was one of the first official US government agencies, and the history that is tied to it is unparalleled. Having produced America’s coinage for well over 200 years, the US Mint has made quite a name for itself amongst collectors both domestically and those from all over the world. While there are many beautiful coins that are credited to the US Mint, few are more sought after by collectors than Mercury Dimes.

Produced throughout the first parts of the 20th century, the Mercury Dime played a major role in the lives of everyday Americans. Nowadays, these coins are sought after for their collector value. Though every collector would like to add one of these coins to their lot of coins, it is not always so easy to do so.

As is the case with any coin sought after by collectors, the condition of the piece is everything. Even though these coins have plenty of age, there are still quite a few remaining in tip-top shape. Difficult to find, it is easy to see why collectors are willing to pay top-dollar for Mercury Dimes that have been well-preserved.

Good: Good is the grade given to Mercury Dimes that have seen an extended period of time having been circulated. The condition of these coins can best be described as poor, and the damage you will see on both faces will be extensive. Though these coins are in fairly poor shape, they are still great additions to any collection as they are more than 75 years old and quite rare.

To price the 1930 Mercury Dime accurately, you must take into consideration a few factors. First, you must consider the type of Dime you have. Because 2 or more types of Mercury Dimes were produced each and every year, the type’s specific rarity comes into play. Secondly, the price of the coin will be directly determined by the condition which it is in. Naturally, those coins that have been well-preserved are the ones that will sell for the higher prices. The chart below will give you a better idea as to what you can expect to pay for a Mercury Dime given its condition and type.