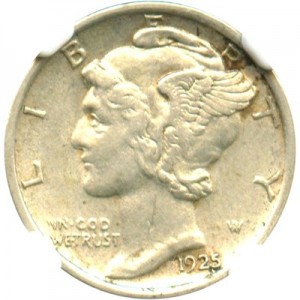 The 1925 Mercury Dime is just one of many editions of the ten-cent piece produced by the US Mint. These coins were first conceived during the early parts of the 20th century, but were so popular and useful that they were kept in circulation for decades. Nowadays, these coins are making a comeback as collectors clamor to get their hands on the most well-preserved pieces around.

While collectors are eager to get their hands on the 1925 Mercury Dime, they are only interested if the piece has withstood the test of time well. Being that ten-cent pieces were used regularly and still are today, it doesn’t take much to realize that many of those that have survived are in pretty rough shape.

For collectors, the condition of a coin is everything because it is never the goal to add a tarnished coin to a collection. When it comes to those people who are attempting to put a Mercury Dime collection together, you will find that even the smallest imperfections can mean the difference between someone buying the coin and bypassing it.

Under normal circumstances, the process of judging the condition of a coin is known as grading and is completed by certified companies, of which many exist. Knowing that grading coins is a timely and expensive process, we have provided below some specifications attached to the different coin grades.

Uncirculated: An Uncirculated 1925 Mercury Dime is one that never saw any time exchanging hands on the open market. These coins have been well-preserved through the years and show no signs of damage. The texture, like on the pillar’s rivets and the wings on Lady Liberty’s head, is still wholly intact, and so too is most of the coin’s shine.

Extremely Fine: In this condition, the coin in question will have been subjected to a decent bit of damage during it short time in circulation. Though any and all wear is only really visible under close inspection, it becomes quite easy to tell that these coins were circulated and not simply kept in a safe their entire lives.

Fine: A coin that is graded to be Fine is one that was circulated for a moderate amount of time, but was pulled out of circulation before it incurred much damage. While there may not be any major signs of wear and tear present on the faces of the coin, you will notice that the coin itself will have lost much of its texture, giving it a smoother feel than anything else.

Good: A coin that is receiving of a Good grade is one that really and truly shows its age. These coins were the most heavily circulated of them all and will have things like major scratches, chips, and might even be bent. These are, as you might have guessed, also some of the most affordable Mercury Dimes around.

When it comes to giving coins as old as the Mercury Dime an accurate price, there are two major factors to consider. First, you must take into consideration the type of coin that it is. Mercury Dimes were produced in 2 to 3 different types every year, and with each type comes a new level of scarcity, so this is the first thing to consider when pricing these coins. Secondly, the condition of the coin will play a major role in determining price. Below, there exists a chart aimed at giving you a better idea of what you might pay for a 1925 Mercury Dime that has been graded.