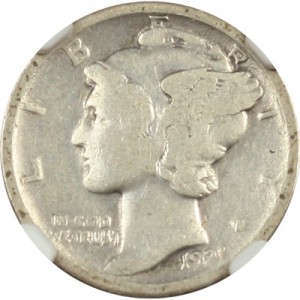 The US Mint has produced many coins that have gone on to be some of the hottest collector’s items in the coin collecting world. Of all the 10-cent pieces ever pressed by the US Mint, few are more popular in the eyes of collectors than the Mercury Dime. This coin not only features an iconic design, it was minted in 2-3 different types every year.

When collectors are considering the purchase of a coin as old as the 1921 Mercury Dime, their primary concern almost always lies with the condition in which the coin is in. Because these coins are so old and have been circulated quite a bit, they are often in poor condition.

Officially having a coin’s condition judged is something known as grading, and is a process typically reserved for completion by a professional company. Understanding that not everyone can afford to have their coins graded, we have provided some basic specifications below.

Uncirculated: As the name of the grade insinuates, these coins were never circulated and never exchanged hands on the open market. Because they were so well-preserved through the years, these coins have retained all of their imagery and even some of the shine from the luster that was applied at the time of minting. Naturally, these are the most sought after pieces in the eyes of collectors.

Extremely Fine: This is the grade given to Mercury Dimes that are in decent overall condition. Though they have been circulated a bit, these coins have retained much of their texture and imagery, and really don’t take on the look of a coin that is nearly 100 years old. All in all, these pieces have been fairly well-preserved.

Fine: A coin that is graded to be Fine is one that saw a good amount of time in circulation and shows it too. The texture of this coin will have been worn down due to the exchanging of hands over the years, but the major features will still be able to be seen quite easily with the naked eye. The heaviest wear is often found on the pillar or on the Lady Liberty’s winged headpiece.

Good: This is the grade given to those coins that were heavily damaged during their time in circulation. These are the coins that stayed in circulation for multiple decades and, as a result, have suffered considerable wear. On these small coins, the imagery and inscriptions will be quite difficult to make out and the coin will generally appear old and used.

When it comes to giving the 1921 Mercury Dime a price, you must look at two factors very carefully. First, the type of coin must be taken into consideration. Because multipe types of Mercury Dimes were minted every year, this is something to take into consideration. In addition, the overall condition of the coin is something that will assuredly affect the price you pay. By way of the chart below, you can gain a better idea of what you will pay for a graded 1921 Mercury Dime given its type.