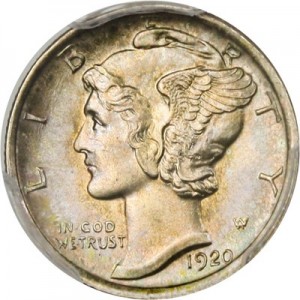 Of all the coins collected around the globe, few mints have produced more pieces of history than the US Mint. Since just after the United States was founded as a nation, the US Mint has been producing its coinage through mints located all across the country. One of the most popular US Mint offerings is the Mercury Dime, which was minted through the early parts of the 20th century.

This coin is nowadays extremely popular amongst collectors and is constantly being sought after. The 1919 edition especially, being one of the first around, is a prize for most collectors. Of course, it goes without saying that any collector desires to acquire one of these coins in excellent condition, however that is not so easy to do.

The 1919 Mercury Dime, being nearly 100 years old, is not often found in pristine condition. These coins were heavily circulated and have typically been subjected to much damage over the years. For collectors, the first thing they do is pour over the surfaces of these coins looking for any and all imperfections. They do this in order to give the coin a value.

Normally, the process of closely judging the condition of a coin is known as grading and is performed by a professional company. Realizing that not everyone has the money to pay professionals to have their coins graded, we have provided some grading specifications below.

Uncirculated: A coin that is graded to be Uncirculated is one that never saw time exchanging hands and was never subjected to damage. Instead, these coins were put away for safekeeping from the moment they were produced. Naturally, collectors will pay an absorbingly large price for these coins simply because their condition is as good as possible.

Extremely Fine: A coin receiving an Extremely Fine grade is one that saw just a bit of time being circulated. These coins will show some damage and signs of wear, but they will generally appear to have withstood the test of time well. Most of the finer detail such as the rivets of the pillar and the detail of the wing.

Fine: In this condition, the coin in question will show a good bit of damage from having spent a good bit of time in circulation. Though the major features of the coin will be able to be deciphered with the naked eye, the finer details will have faded away and smoothed out due to the exchanging of hands. These coins are not quite as valuable as the finer grades, but are still a great addition to any collection.

Good: To receive this grade, the coin in question will have had to be pretty well beaten up. Most of the coin’s faces will have smoothed out over the years and finer details have faded entirely. Thanks to the fact that these coins were so popular whilst in circulation, most on the market today are of this grade.

In order to give coins like the 1919 Mercury Dime an accurate valuation, you must look at two things; the type of coin it is, and the condition it is in. Naturally, coins that have been well-preserved over the years will sell for more money than those that have been damaged. Because Mercury Dimes had multiple types of the coin minted every year, this is also something that plays into how much the coin will sell for. Below is a chart that will give you a better idea of how much a graded 1919 Mercury Dime will likely sell for today.