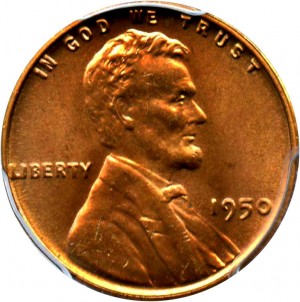 The Lincoln penny has been produced for well over 100 years and is easily one of the most identifiable pieces of US coinage. The 1950 Lincoln penny is especially sought after by collectors. For one, the coins are valuable due to the scarcity that comes inherent with a coin that is so old. Secondly, the number of well-preserved pieces is dwindling, so it is crucial that collectors get their hands on them sooner rather than later.

On the coin’s obverse you will see in the center the detailed image of Abraham Lincoln. To the left of the President’s image is an inscription, raised off the face of the coin, which reads “Liberty.” Opposite the Liberty inscription is one that marks the 1950 year of minting. The phrase “In God We Trust” is arching overtop of the obverse.

On the reverse side of the 1950 Lincoln, you will see two inscriptions in the center. One of the raised inscriptions reads “United States of America,” while the other marks the “One Cent” face value. Curving along the left and right outer edges of the reverse are two single stalks of wheat, which is how the coin got its “Wheat Penny” nickname. Finally, the Latin phrase “E Pluribus Unum” is arching overtop.

When it comes to the 1950 Lincoln penny, condition of the coin means absolutely everything to collectors. Because of this, you will notice that the only pieces sought after by collectors are those that have been graded. Below, we will introduce you to the different coin grades as well as what they might mean for the appearance of a 1950 Lincoln penny.

Uncirculated: A coin that is graded as being Uncirculated is one that never spent any time on the open market and never exchanged hands. Thanks to it having been preserved throughout the whole of its existence, the faces of an Uncirculated 1950 Lincoln will be free of blemishes and appear the same way they did the day they were minted.

Extremely Fine: A coin that is graded as being Extremely Fine is one that was not heavily circulated, and has avoided most damage. With that being said, there is usually a small flaw or two which is uncovered and notated during the grading process. It is these small flaws that downgrade the coins from Uncirculated to Extremely Fine.

Fine: A coin determined to be of Fine grade is one that was circulated for a good bit of time, but has managed to avoid most major signs of damage. Though there will definitely be some light scratching and smoothing due to the exchanging of hands over the years, the raised aspects of these coins will have been well-preserved.

Good: If a 1950 Lincoln penny is determined to be of Good grade, this means that it spent a large majority of its time in circulation. Due to the constant exchanging of hands over the years these coins have been heavily damaged to the point where some of the imagery and lettering will have been worn away. The flaws on these coins will range from deep scratching to intense smoothing.

Because there were up to 3 different types of Lincoln pennies minted every year, the type of penny you own goes a long way in determining its value. Beyond this, the grade of the coin will also play into its value determination. Below is a chart aimed at helping you understand what a 1950 Lincoln might be valued at given its type and grade.