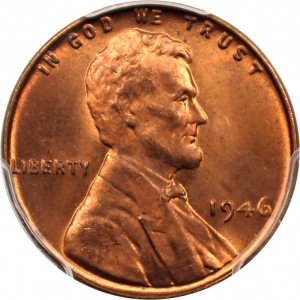 Pennies may be the lowest denomination of US coinage currently in circulation, but they are also some of the most sought after coins for collectors. While the modern penny may not be worth much at all, older versions of the coin are quite valuable. The 1946 Lincoln penny is an example of a coin that is highly sought after by collectors.

On the coin’s obverse, the central aspect is dominated by the profile of former President Abraham Lincoln. Immediately to the left of Lincoln’s image is a raised inscription of the word “Liberty.” To the right of the central image will be an inscription marking the 1946 year of minting. Finally, the phrase “In God We Trust” arches overtop of the obverse.

On the coin’s reverse, there are two inscriptions taking up a majority of the center aspect. One of those raised inscriptions will read “United States of America” while the other will read “One Cent.” Along the left and right outer edges there are featured two stalks of white. The existence of these wheat stalks is why the coin is sometimes referred to as the “Wheat Penny.” Arching overtop of the reverse is an inscription which reads “E Pluribus Unum.”

Because the 1946 Lincoln was produced so long ago, the condition these pennies are in now can vary drastically from piece to piece. As such, collectors demand that coins this old are graded by a professional organization. Below we will introduce you to the different coin grades as well as what they mean for the 1946 Lincoln.

Uncirculated: A coin that is graded as being Uncirculated is one that never spent any time exchanging hands. From the moment it was minted the coin was likely placed into safekeeping and was able to avoid damage commonly associated with coins that have been heavily circulated. These coins are absolutely flawless in every way.

Extremely Fine: A coin that is worthy of the Extremely Fine grade is one that was likely never circulated, but was still damaged to some degree. Whether it be a small chip or scratch, there is usually one or two very minor flaws on these coins. Despite this, they are still highly collectible and sought after.

Fine: Fine is the grade given to Lincoln pennies that have been circulated for quite some time. Though these pieces are still in decent shape, they will show some very visible signs of their time in circulation. Things like scratching and chipping will be noticeable, but will not be enough to compromise any of the coin’s raised features.

Good: Good is a grade given to coins that were heavily circulated as well as heavily damaged. From deep scratching to the complete smoothing of some of the raised features, these coins have definitely seen their better days. Though the value of these coins might be far less than similar coins of better condition, they are still a great addition to any collection.

As for the pricing of the 1946 Lincoln, this is something that depends on a few different factors. For one, there were 3 different types of Lincolns produced in 1946, so the value of the coin will heavily depend on its type. Secondly, the condition of the coin means a lot as far as value is concerned as well. Below is a chart that will help you understand the value of a 1946 Lincoln given its type and condition.