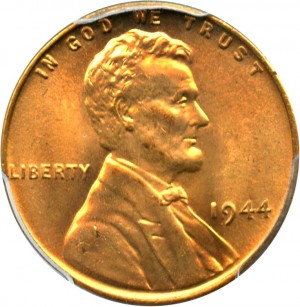 The Lincoln penny has been produced in the US for almost as long as coins have been produced by the US mint. The 1944 Lincoln penny is particularly desirable in the eyes of collectors not only because of its design, but also due to its scarcity. Being that there are no more 1944 Lincolns being produced, the scarcity of these coins is constantly on the rise, thus making the coins more valuable.

The coin’s reverse features in the center two different inscriptions. One of the inscriptions marks the “One Cent” face value while another simply says “United States of America.” On the left and right outer edge of the reverse you will see two individual stalks of wheat, which is why the penny is sometimes referred to as the “Wheat Penny.” Finally, the Latin phrase “E Pluribus Unum” is arching overtop.

Because the 1944 Lincoln penny is so old, collectors only desire to have pieces that have been graded. To make a long story short, grading is nothing more than having the coin’s condition professionally assessed. The following will provide you with a listing of the different coin grades as well as what they mean for the 1944 Lincoln Penny.

Uncirculated: A coin that is graded as being Uncirculated is one that never spent any time exchanging hands. From the day it was minted the coin was kept in a safe place where it avoided any and all damaged typically associated with a coin so old. The coin’s color might have faded to some extent, but the condition is flawless.

Extremely Fine: A coin that is determined to be of Extremely Fine grade is one that will be in mostly perfect condition, but might have a flaw or two. On these coins, the flaws may be as small as a single scratch, but even this is enough to detract from the coin’s grade.

Fine: Fine is the grade given to 1944 Lincoln pennies that have been circulated for an extended period of time, but have not been so heavily damaged. The damage you will notice on these coins will be things like light scratching and a few chips, but the major features of the coin will have been well-preserved.

Good: Good is the worst grade a coin can receive and is usually indicative of a coin that has been very heavily damaged. These coins are so damaged that some of the raised lettering and imagery will have been worn away almost entirely. Despite their poor condition, these pieces are still highly desirable.

If you are attempting to price the 1944 Lincoln penny, there are a few different things you must take in to consideration. First, because there were up to 3 different types of Lincoln pennies produced every year, the exact type of coin plays into its value. Secondly, and perhaps quite obviously, the condition the coin is in means everything. If the coin is well-preserved, it is going to be worth more than a coin that has been heavily damaged. Below is a chart that will help explain the different values for a 1944 Lincoln given its type and condition.