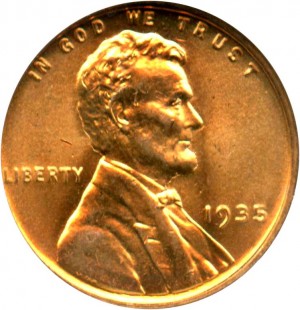 The 1935 Lincoln penny, in many ways, resembles the penny that is still in circulation today, but is far more valuable. Thanks to its scarcity as well as its age, collectors scramble to get their hands on these coins. After all, being that they are no longer being minted means that there are only ever going to be fewer Lincoln pennies. No matter the condition, they are highly collectible.

The obverse side of the 1935 Lincoln penny is designed in much the same way as the modern penny. In the center you will notice the raised depiction of President Abraham Lincoln. The President’s image is highly detailed and is accompanied with two inscriptions, one that reads ”Liberty” and one that marks the 1935 year of minting. Arching overtop of the obverse is a raised inscription which reads “In God We Trust.”

On the reverse side, the central aspect features two inscriptions; one that reads “United States of America,” and one that reads “One Cent,” marking the face value. On either side of the central inscriptions are single wheat stalks. It is these stalks of wheat that give the coin is “Wheat Penny” nickname. Finally, the Latin phrase “E Pluribus Unum” is seen arching overtop.

For a Lincoln penny from 1935, collectors are overly concerned about the condition the coin is in. Because they are so old, there is a lot of wear and tear that these coins cold have been subjected to. As a result, you will find that most 1935 Lincoln pennies are graded. Below, you will find an outline of the different coin grades as well as what they mean for a 1935 penny.

Uncirculated: A coin that is determined to be of Uncirculated grade is one that will show no flaws whatsoever. These coins will not have a single scratch or mark and will appear as they did the day they were minted. Apart from the fading of the coin’s color, which happens due to age, these pieces will be in perfect condition.

Extremely Fine: A coin that is Extremely Fine is one that might have a minor imperfection or two, but will appear to be mostly pristine. Under the close inspection of a grader, a single scratch or chip will be made out, but other than that these coins are in excellent condition and are at the top of the list of coins collectors want to get their hands on.

Fine: If a coin receives a Fine grade, this means that it has been circulated for quite a bit of time. On its faces you will notice some smoothing around the outer edges as well as some scratching that came about due to heavy circulation. Still, the raised imagery and lettering on these coins will be able to, for the most part, be made out.

Good: If a coin is determined to be of Good grade, this means that it has spent a large majority of its existence being circulated. The constant exchanging of hands means that these coins will be extremely heavily damaged. Even with all of this damage they are still quite desirable in the eyes of collectors.

If you would like to determine the value of a 1935 Lincoln penny, this can be done by taking into consideration both the condition the coin is in, and the type of coin you have. 1935 saw three different types of Lincoln pennies minted, which means there will be different values for coins of the same grade, but different type. The chart below will help you understand what these values are.