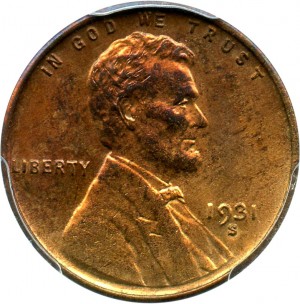 The 1931 Lincoln penny might look familiar to you, and the reason for this is because the design, or at least part of it, is still being used today. For collectors, these coins are inherently valuable not only due to the design, but also due to the coin’s age and its increasing scarcity. As such, they are a must-have for any serious collector.

The coin’s obverse side is dominated by the profile image of Abraham Lincoln. The President is depicted in stunning detail, with the contours of his face easily made out with the naked eye. To the left of Lincoln’s image is a raised inscription which reads “Liberty.” To the image’s right, you will notice the raised inscription of the 1931 year of minting. Arching over the top of the obverse is the inscription “In God We Trust.”

On the reverse side, the coin is dominated in the center by two raised inscriptions, one that reads “United States of America,” and one that reads “One Cent.” Two both the left and the right of the central inscriptions are two individual wheat stalks. This is how the penny got its “Wheat Penny” nickname. Arching over the top of this side of the coin is the Latin phrase “E Pluribus Unum.”

As for the 1931 Lincoln penny, few things are more important than the condition it is in. As a result of this, you will notice that most Lincoln pennies desired by collectors are also graded. When it comes down to it, grading is nothing more than a process by which a professional assesses the actual condition of the coin. The result of this assessment is the grade. Below is an outline of the different grades as well as what they mean as far as the condition of the coin is concerned.

Uncirculated: Uncirculated is the grade given to coins that never spent any time exchanging hands. Thanks to the coin being kept under lock and key throughout the whole of its existence, there are absolutely no signs of visible wear and tear. The coin’s coloration might be slightly faded due to age, but other than that will be flawless.

Extremely Fine: A coin the receives an Extremely Fine grade is one that might have spent a small amount of time in circulation, but incurred almost no damage. Under extremely close inspection, the grader might be able to notice a single scratch or chip, and that is all it takes to drop from Uncirculated to Extremely Fine. Despite this, these coins will appear to be mostly pristine.

Fine: A coin that is graded as being Fine is one that definitely spent time in circulation, but might not be very heavily damaged. You will definitely be able to notice some scratching and maybe even some smoothing, but all of the images and lettering will still be able to be made out.

Good: A 1931 Lincoln that is graded as being Good is one that spent a large majority of its existence in circulation. When you take into consideration how old these coins are, it makes sense that all that time on the open market resulted in quite a bit of damage. Some of the finer details will likely be gone, and some other major imperfections may be present as well.

If you would like to know the nominal value of a 1931 Lincoln penny, this is something that depends heavily on a few different items. For one, the condition of the coin weighs in on its value heavily. Beyond that, there were often more than 2 different types of Lincolns minted in a given year, so the type is also something you must take note of. Below is a chart that will help give you a better idea of what a 1931 Lincoln penny is valued at.