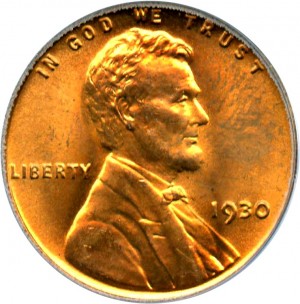 The Lincoln penny is an iconic piece of US coinage history. That much is perfectly exemplified by the fact that part of its design is still in use today. For collectors, the 1930 Lincoln is just one of many that must be added to any competent collection. As time moves forward, these coins will only become increasingly sought after due to their increasing scarcity.

As for what the coin looks like, the obverse is dominated by the central profile of Abraham Lincoln. The original design was created to commemorate the 100th anniversary of Lincoln’s birth, but it was so beloved that it has persisted to today. Above the former President’s image is an inscription which reads “In God We Trust.” To the left of Lincoln’s image is an inscription that reads “Liberty” while the 1930 year of minting is listed to Lincoln’s right.

The reverse side is a bit more simplistic, but stands out due to their being single stalks of wheat on both the left and right hand sides of the coin. This is how the penny originally received its “Wheat Penny” nickname. In the center of the reverse is an inscription that reads “United States of America” and is joined by another inscription that reads “One Cent.” Finally, the Latin phrase “E Pluribus Unum” arches overtop.

For collectors, the condition of a 1930 Lincoln penny means everything. As such, it makes sense that graded Lincoln pennies are the ones that make it into collections. Grading is nothing more than a professional assessment of the coin’s condition. Below is an outline of the different grades as well as a brief description of what those grades mean.

Uncirculated: A coin that is determined to have been Uncirculated is one that never exchanged hands. In essence, these coins have been kept in safekeeping since the day they were minted. As such, all of the raised lettering and imagery will have been absolutely perfectly preserved through the years.

Fine: If a 1930 Lincoln penny is graded as being Fine, this means that it has been circulated quite a bit. You will notice scratching, smoothing, and even some chipping, however the raised aspects of the coin will still be intact and able to be deciphered with the naked eye.

Good: Good is the grade given to coins that have been exteneively circulated. These coins will show plenty of wear and tear, some of which might be severe. All in all, most of the major aspects of the coin will be able to be made out. Some of the finer details, however, might have been worn away a bit.

When it comes to assigning a nominal value to the 1930 Lincoln, you have to take into consideration both the type and the condition of the coin. Being that there were up to 3 different Lincolns minted year in and year out, there are a number of different values for a penny from 1930. Below is a chart that will hopefully help you make sense of what the value of a particular 1930 Lincoln is.